'twas the night before Steelers football 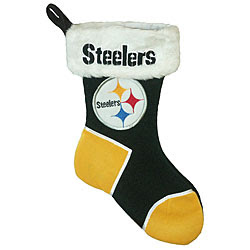 just like christmas.  that's what it feels like right now.  well, to be more precise, it feels like the days right before christmas: those slow, anticipation-filled days.  like the hands of the clock are covered in quikrete, grinding to a halt so that christmas may just never get here.  yep.  that's how i feel right now.  the pittsburgh steelers season is a mere 52 hours away as i write this, but that feels like it might as well be a year and a half.  i just can't wait for it to get here.  so, to try and move beyond the incessant nail-biting and clock-watching, i thought i'd spend my time today usefully, and compose a poem.  it is a well-known tradition throughout the Steeler Universe that defensive coordinator Dick LeBeau (who you may remember was just inducted into the Pro Fooball Hall of Fame this year) takes time each year to read a famous Christmas Poem to his players.  and while this may not seem like the most testerone-fueled activity, it is nonetheless a treasured tradition to the Steelers players who refer to LeBeau as "Coach Dad."  and so, in an sort of homage to Coach LeBeau and his annual poetry reading, i thought i would compose my own verse in a similar style.
note:  there are a few inside jokes in this poem that you might not get (or at least not as fully) unless you are a regular at what is, in my opinion, the greatest steelers blog on the interwebs, behind the steel curtain.  btsc is a place where steeler fans meet online to discuss football, and just about everything else.  recently, the artistic director of the pittsburgh Camerata (a chamber music group in the steel city) wrote about the similarities between an NFL quarterback and the conductor of an orchestra.  anyway, if you're a steelers fan, i would highly recommend checking into btsc from time to time where you will find some kindred spirits.  now, on to the poetry... (click on the keep reading link to read the poem)
‘Twas the night before kickoff and all through the "Nation,"

not a Stiller fan was stirring, due to some healthy libation.

The terrible towels were placed by the TVs with care,

in hopes that HD images of victory soon would be there.

The Steeler fans were sleeping, all snug in their beds,

while visions of hypocycloids danced in their heads.

had just settled down after a prayer to the Lord.

When out in the family room, I heard such a noise,

I could have sworn it sounded like Big Ben and the boys.

I raced down the hall and into the den,

and couldn't believe what I discovered then.

There in the room (right on the couch!)

sat Tomlin and LeBeau - my wife will vouch.

at the coaches before me - wow, what a pair!

Then my wonder grew deeper while I leaned on the wall,

as I watched Coach LeBeau stand up and call,

come out all you linebackers, you all are so good.

and now Troy, the magnificent ,with hair long and flowing.

it's time to let loose the steel curtain attack!"

When, what to my wondering eyes should appear,

Then Tomlin stood up; he seemed strong - you should know it -

and he began to orate like a warrior poet.

He spoke with golden tongue, and appeared quite loose

(I noticed there was no coach there named Bruce).

And he called forth the offense by name, one by one,

until each was there - can you imagine my fun?

He called for Starks , Kemo, Essex, and the Rookie,

he called for the Hotel, who was eating a cookie.

and the future hall-of-famer was smiling so wide.

He called for Big Ben, then Lefty, Batch and Dixon,

Coach couldn't wait for the end of the suspension.

He called for Rashard, who came in with a spin,

then the room got real quiet as they all leaned in.

And then Coach gathered them around and he said, "Men,

let's hear a big cheer for the one we call Redman!"

The team was all there - what a sight to behold -

it made me proud to be a fan of the great black and gold.

It felt so amazing, so good, just like heaven,

when I heard the team say they'd get trophy number seven.

And then in an instant they were gone with a howl,

so I stood there just waving my terrible towel.

It might have been a dream, for all I can say,

but I know that tomorrow they'll be ready to play.

While this night felt like a great Steelers party,

tomorrow they start fighting for that seventh Lombardi.

So sleep tight, Steeler Nation, ‘til the sun shines down bright;

happy game day to all, and to all a good night!