the mystery of the spirit

September 03, 2010
i was recently commissioned to make an assemblage for someone (an assemblage is basically a collage that is made with three-dimensional objects rather than just paper) who had really liked another of my pieces that i sold.  it had to wait until after the move and until i got my art area set up and semi-functional, but i finally was able to do it, and it is now finished and delivered.  when i make a commissioned piece, my anxiety level is always way higher because i am worried about how it will be received.  when i just make a collage for fun, i make it the way i like it, because it seems to appeal to me in some way.  but when i make for someone else, i am so burdened by every little item, so concerned about each decision.  so, it was a relief when i heard from the recipient that they really liked it and were so grateful for it.  insert big sigh of relief here.  and here is the piece: 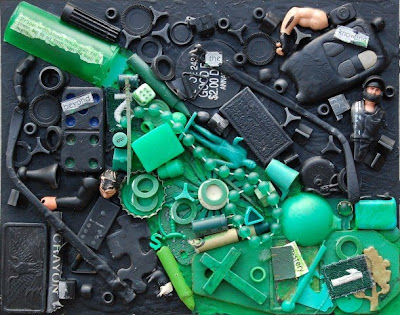 "the mystery of the Spirit"
mixed media assemblage
august, 2010
gregory a. milinovich
*in other news, it was my half birthday yesterday, and no one remembered or bought me any steelers merchandise or anything. come on, people!  you only turn 34.5 once!  geesh.
*the weather this last week could be characterized as: hot, hotter, sweat your face off, hot again, and could-someone-please-put-a-dagger-in-heart-of-summer.  seriously.  i'm ready for crunchy leaves and apple cider, sweatshirts and the smell of crisp air.  bring me fall!  or bring me death football, at least!
*speaking of football, my pittsburgh steelers won their final preseason game last night, but likely lost the guy who was going to start the first several games for them at quarterback.  i feel bad for byron leftwich, of course, but i am sort of neutral about this from a team perspective.  i'm not sure who the best guy is for the job, and i'm willing to just let it unfold.  but the real problem is that we have now entered the longest week of the year for me - that week between the final steelers preaseason game and first steelers regular season game.  it's like all the clocks drink decaf for this week.  c'mon, time!  let's move it!
*i came across this tony campolo quote on twitter, and thought it might be worth sharing, at least for a laugh: "I've always been skeptical of those television healers who r bald. If I had that gift, that'd be the first thing I'd fix."
*not that i'm going bald.  i'm not.  i've got hair that's thicker than a bin of brillo pads at the dollar store.
*today is my first day off with jackson at school.  i was trying to think of what caedmon and i would do with our day, and jack warned us, "don't have any fun until i get home from school."  well, then, i guess that setttles it: we'll be exercising all day (least fun activity i could think of).
*i just purchased an indie album on amazon by a band called steel train, and i love it!   it's only $5 at amazon, and you can get it here.
*well, that's it for now.  i must get busy not having fun and watching the clock crawl, sloth-like, towards next sunday.  wake me up when september ends.  (well, at least the first week).