September 06, 2010
***since this post deals with things my kids say, please know that it may or may not include references to poop, boogers, flatulence and other hilarious stuff.*** 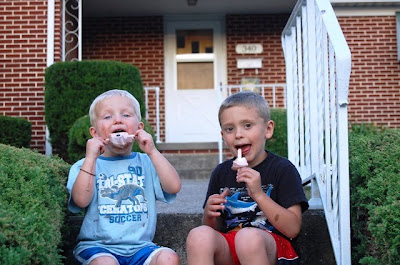 when caedmon burps, he often quips, "excuse me.  i farted in my mouth."
when jackson asked if the mcdonalds we were going to had a play area, shannon told him, "there are no guarantees."  he replied, "yeah, but there is one hope."
when driving past burger king, jack asked me why he is the king of boogers.
we live near a place called shamokin dam.  i like to say "shamokin" as if i am jim carrey in the mask: "shaaaa-MO-kin!"  well, jack has now picked this up, and follows it up with a dramatic "dam" at the end which makes it sound a little dirty.  oops.  then cade repeats it.  so, the whole time we drive anywhere near shamokin dam, i have to listen to choruses of "shaaaa-MO-kin deeeeeeeaaaaaammmmmm" from the backseat.  awesome.
cade calls palm trees "bonka" trees, because he's seen in the cartoons where the coconuts fall and hit them in the head.  ouch.
and, as jack says, hope you have a happy neighbor (labor) day.

Emoly said…
this had me laughing out loud during my break from playing Lego's... I should thank Jack and Cade for stirring up the Lego passion that Bill and I had subdued long ago.
9:37 AM