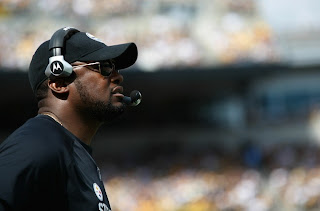 well, its a day following a steeler game, which means i should probably warn you about what you can expect for the next several months.
if you are checking my blog and the steelers played the day before, you're probably going to be reading something about the steelers.  if they lose, it will be something like, "i don't really want to talk about it," but if they win, you can usually expect a few pictures and a few sentences or so discussing the game or my experience of the game.  i'm not offering in depth analysis here.  there are literally dozens of steelers blogs that are dedicated to some incredibly intricate analysis of the steelers, so i have nothing to add to those conversations here on my happy little blog.  but i also can't help myself but write a little, so you just have to put up with it.  i know my steelers-related posts meet mixed reviews (some of you like them, some of you stop coming to my blog at all about this time of year), but i always remember that i'm not really writing in order to get you to come to my blog.  i'm not a social-media expert.  i'm just writing because i love to write.  and, i love to write about the steelers (when they win).  and there you have it.
so without further ado,
THEEEEE STEEEEEELERS WIIIIIINNNNNN!!!!!!
yesterday was an intense day, and an complete emotional roller coaster for me.  yes, i know mike tomlin praised his team because they did not ride an emotional roller coaster, which makes me glad that coach tomlin wasn't in my living room around 1pm yesterday, because he would have grabbed me by the spot where one would be wearing shoulder pads and he would have glared at me with those incredibly open eyes and he would have told me to pull it together...that the team needs me to stay focused.  you see, i had lost my focus because i allowed my sadness to overwhelm me.
all week long i've been anticipating steelers football.  as you may know, i even wrote a poem about the anticipation that i go through.  needless to say, i was excited.  i did my homework on the network situation (i don't have direct tv), and knew that fox would be showing the game, since the local fox station out of philly wouldn't be playing the eagles at 1pm, since the eagles don't play until 4.
so after church i came home and put my jersey one and got everything set up in the mancave.  the whole family ate lunch down there in the excitement of kickoff sunday.  and then on a whim i thought i'd better just check the info to make sure the game that was coming up at 1 was the steelers.  and it wasn't.  it was giants/panthers.  are you kidding me?  I MOVED TO PENNSYLVANIA SO I COULD SEE MORE STINKING GIANTS GAMES?!?
it was literally like a punch to the abdomen.  i quickly moved away from my family, because i didn't want them to see the tear that had started rolling down my cheek.  i spent a few minutes feeling sorry for myself (all they way through the first steelers drive, i think), before i realized that i have a high-powered radio that will at least get the game audio for me.  so i did that, and soon forgot about my misfortune, instead watching the bengals get destroyed by the pats on cbs while listening to bill and tunch on the steelers radio network (i don't know if anyone else listened to them yesterday, but bill hillgrove was simply terrible.  i mean awful.  he got so many things wrong it was very distracting.  at one point in the 4th quarter he kept saying the score was 12-12.  nope.  it was 9-9.  during mendy's game winning run, he reported that mendy fumbled the ball and then picked it up again.  nope.  and numerous times he had down and distance wrong, and was just generally awful.).  so while i was so sad about not getting to watch the first game on tv (stupid philadelphia fox) i calmed down and enjoyed the usual heart palpitations and blood pressure elevations that go with steelers games.
all in all, it was a fun game to watch, err, i mean listen to.  not much offensive excitement, but a great hard-nosed defensive battle, which makes for some great steelers football.  i can't comment on many players' individual performances, since i really didn't get to watch it, but i will say that it was awesome to see hines ward have such an active role in the win, as he is a major team leader at this point and really led by example.  the fact that he is still breaking records left and right, and going strong, brings me nothing but great satisfaction.
i thought dixon was fine.  it sounded to me like he was extremely nervous and tight, probably scared to death of making a big mistake, but he was able to overcome that to a certain extent and begin to make some real throws.  i thought it was a decent game for him, and one that will hopefully give him confidence going into next week. 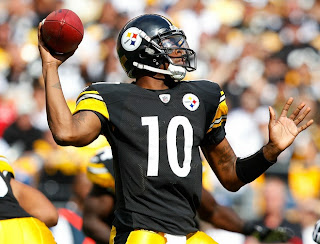 and what can i say about the steelers defense?  holy cow, they were good.  even without big snack, who left with a hamstring injury, they were solid against a quality offense there with matt ryan at the helm.  they bent a little bit in the middle parts of the field, especially with those passes to roddy white, but they never broke, only giving up field goals.  i have to give them credit for that, and i especially loved seeing troy back out there making an interception at a critical time.  gotta love it.
and in the end, it is a win.  we are 1-0, undefeated so far in 2010 without our franchise quarterback.  i can't complain about that, and i can only celebrate that we won it in overtime with a great running play, complete with perfect blocking, and hope that that is a sign of things to come this season.  go steelers! 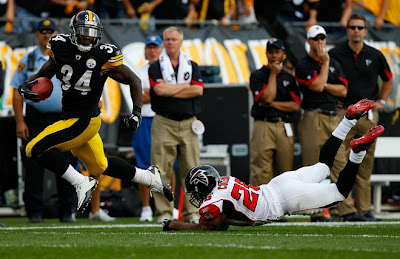 Emoly said…
*sigh* I am one of those who typically avoids your blog. Although maybe because of you and your blog, I may be thinking about not hating the Steelers so much. When I have to think about all the other teams out there, there are other teams I loathe more (ahem, Cowboys and ALL Atlanta teams nfl, nhl, nba, mlb...) and after listening to the Bears/Lions game on the radio (not because we couldn't get it, but because we were in the car driving back from Indy), maybe just maybe it would be nice to watch a team that wins. I don't have to be a #1 Steelers fan, but maybe now I can watch a game and not want to vomit when I see black and gold...
10:47 AM

greg milinovich said…
i feel like i've just accomplished my life's work. ;)
10:53 AM

Anonymous said…
Loved the Steeler poem, love the Steeler post. Why would you write about anything else? This is the stuff of life!
9:28 PM

Bill Uebbing said…
Like Em said, listening to the Lions Bears (oh, my!) game on the radio was a throwback. The announcers were generally awful, not descriptive and since it was the Bears Radio Network, rooted for the home team a bit too much.
I was glad I punched over to "Wait Wait Don't Tell Me" before all the falder-all and fiddle-dee-dee that happened in the waning seconds of the game.
Driving while stroking out is a bad combination.
I celebrate your primal love for the game! Like my daddy used to say, a game is what you play when nobody gives a crap who wins... This is war!
9:28 AM