*just as an addendum to yesterday's random post: wildebeast is supposedly spelled wildebeest.  i figured that out yesterday, but presumed that if i spelled it correctly, some of you would comment saying that i had misspelled it.  weird.  if ever an animal should have the word "beast" in its name, the wildebeest is that animal.  and yet it doesn't.  crazy english language.

* i was excited about the finale of top chef last night, only to fall asleep before it came on.  i was exhausted but i was happy to wake up the news that ***SPOILER ALERT*** kevin won.  he works at a restaurant in new jersey that we never went to, but drove by a couple of times, and so that was enough reason for me to root for him through the whole series.  and he won.  of course now he's leaving that restaurant and starting his own.  rats.

*that's it: i'm addicted.  i've been trying to deny it, but it has become completely clear and unavoidable at this point.  everyday when i read the paper, if i don't turn to the puzzle page and do the cryptoquip, then i immediately start to the get the shakes and get irritable (more than normal).  what is the cryptoquip, you ask?  it is like some random quote or pun or saying of some sort (usually unbearably cheesy) in which the puzzle makers have switched every letter to another letter.  you have to solve the puzzle by figuring out which letters stand for other letters.  like in this sentence:  u ynkj gcj tgjjyjpt! where j = e.  (answer at the end of this post).

*thanks for all your helpful suggestions for my polity class tonight (please read that sentence in the most sarcastic voice you can muster...thanks.)  i think if i follow your advice i will use colored dry-erase markers to draw pictures for the first 5 minutes and then we'll all go out for ice cream.  now that i think about it, we could call it "holy conferencing."  i think they should make an ice cream called 'holy conferencing.'  it would have a bunch of nuts in it.  thank you, thank you...i'll be here all week.

*  now listening to:  sigh no more by mumford and sons.

* in today's strange news, it appears that the epic villain of the eighties who struck fear in hearts of many a young jedi, is now striking fear in the hearts of convenience store owners in detroit.  oh how the mighty have fallen.  darth vader used to fight for the dark side of the force.  now he fights for a couple hundred bucks and a handful of slim jims.  sad, really. 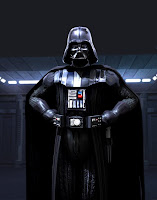 * the answer to the above cryptoquip is:  i love the steelers.  now, back to the media guide.  peace!

Emoly said…
I quick scrolled to the comments before I saw the answer, I'm guessing (because I actually tried to solve it)
"I love the Steelers!" Now I will go back and see if I'm correct...
9:53 AM