August 27, 2010
before i moved, i had been approached by someone about making a collage for them, and i just couldn't do it at the time because much of my stuff was already packed, and i had too much to do in preparation for the move.  but we agreed that once i got to sunbury and got settled in, i would work on this piece.  well, i'm so glad for that set of circumstances because that agreement really served as the catalyst for me to make it a priority to unpack and organize all of my collage stuff.  if not for the commissioned piece, my boxes and boxes of paper, glue, and paint might still be in stored away in banana boxes.  but they aren't.  in fact, i've got a sweet little area set up in my basement that is my "art room," and i've already been putting it to use.  having already started working on the commissioned piece (i can't show you that one yet because the intended recipient hasn't seen it yet!), i got inspired and starting working on some other pieces, too.  this is usually how i work, creating several different pieces at the same time.  anyway, this one started with an old church registration pad sheet, and went from there.  it's called "wish to join," and it has the distinction of being the first collage i made in sunbury.  hopefully the first of many. 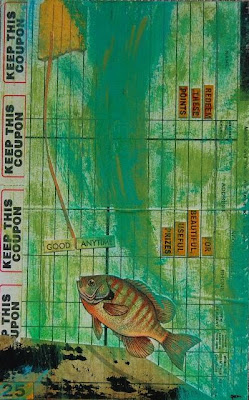