why i am happy for alex rodriguez 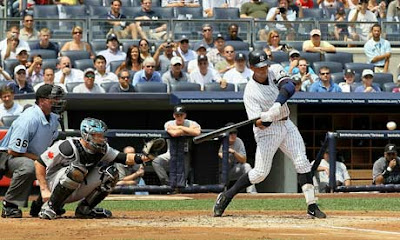 yesterday, new york yankees slugger connected for his 600th home run in the big leagues, becoming only the seventh player ever to accomplish that milestone.  while much of the baseball world applauds this achievement, there are some who refuse to celebrate this because of the questions about steroid use in a-rod's past.
i understand this.  i really do.  i remember when barry bonds was on the quest for baseball's all-time home run record, and i recall my own distaste for bonds' attempts and eventual success.  some of this was because of the obvious effect of steroids in the barry bonds story, but not all of it.
actually, i'm realizing, the effect of steroids and other chemicals on the game of baseball, while very disappointing, is hard to measure and quantify.  who did it?  and for how long ? and we will NEVER know the answers to those questions.  and while i hate that it happened, i have to just deal with the fact that it happened.  these numbers that players are reaching are likely the result of strength and endurance that was afforded them by the use of drugs.  how much of it?  who knows.
here's what i do know: when a-rod launched that baseball over the centerfield fence right in front of monument park in yankee stadium yesterday, i was happy for him.  and here's why:  i've seen him change.  when he came to the yankees, a-rod was often described as aloof and distant, and just as often accused of caring more about money and personal accomplishments than being a team player.  not any more.  i don't know what changed him.  i'd like to think that playing beside derek jeter helped alot.  or it could have been winning a championship last year with a group of guys that really functioned as a team.  who knows?  but it is clear that alex rodriguez has come to remember the fun of playing baseball, the boyish joy in it, and the honor it is to be a part of a team who is trying to accomplish something together.  he forgot that for awhile - maybe for a very long time.  but it seems like he gets it again.  who knows how checkered his past is?  i don't know that his 600 home runs (youngest player ever to reach 600) mean the same thing as ruth's or aaron's, but i am happy for him nonetheless.  baseball needs high profile guys who can lead by example in simply enjoying the game and playing for more than self and money.
so, congrats, a-rod.  i hope you hit another 200, but much more than that, i hope that you keep enjoying the enormous privilege you have to play a game for a living, and that you keep focusing on the joy of being a part of a team, teaching those around you to do the same.