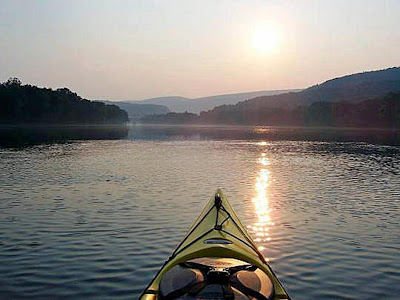 yesterday a friend from church invited me to spend a couple hours in the afternoon in a kayak on the susquehanna river.  for those who don't know, we live just up the hill from the susquehanna, and the river, which cuts down through the center of pennsylvania, really offers some beautiful scenes.  having not kayaked in a really long time, but thinking i would enjoy a little recreation while getting some of the local flavor, i took him up on it. we agreed that he would pick me up at one, kayaks in tow, ready to take a ride around "the island" on which is located shikellamy state park.
so i left work around noon, grabbed a ham sandwich and looked forward to a couple relaxing hours.  my friend picked me up, we got to the park, unloaded the kayaks, and were in the water in no time.  i really enjoyed the tension of the oar against the water, propelling me forward; the sound of the water lapping against the kayak; the feel of the wind off the river.  we headed north for a bit before making the turn to stay around the island and coming down the other way we encountered a few boats and wave runners (just a very few, really), and the wake they caused in the water was enough to cause the kayak to bob up and down a bit, which in turn was enough to make me feel a little sick.  but we paddled on, south along the island, continuing to talk about the town and things at church, and i'm doing my best to keep my best foot forward as the new pastor, still wanting to make a good impression (it's probably too late for that).  all the while, i'm feeling more and more sick, and less and less like talking.  i started paddling faster, just hoping to get back to the dock.  we turned the southern corner of the island and started back north, and couldn't have been but several hundred yards from the dock when my friend asked me a question and i felt something that felt distinctly like a ham sandwich coming up my throat.  i leaned over the other side of the kayak and left a souvenir in the susquehanna (well, at least what didn't end up on my shirt, anyway): a partially digested ham sandwich.
so embarrassing.  you know, best foot forward and all of that.  i can't even float in a kayak without dumping the contents of my stomach to be carried away down to harrisburg.  geesh.  my friend was very gracious about it, not visibly laughing at me at the moment, but did call later to give me a good ribbing, which i fully deserved.  my stomach didn't feel right the rest of the night, and even this morning i still feel a bit off, which is ridiculous to even say, but it seems that i've got my mother's stomach when it comes to water travel, which is to say that i get nauseous just stepping over a puddle, let alone sitting on a boat that bobs up and down like a bottle with a message.
so, i figured i'd tell this story this morning as i figure it will soon be out anyway, likely printed in the church newsletter this month.  better to tell it myself and get it out of the way.  but let it serve as a warning to you: if you invite me to join you on something more strenuous than eating a ham sandwich, just make sure you stand at a safe distance.  here's hoping tuesday involves less regurgitating, but just as much laughter.  have a good one.

NJ Grandma said…
OMG - you poor guy - I admire you for even getting into the kayak first of all and you practically made it around the whole island - you did good - hope you are feeling better soon. ~Gail~
8:00 AM

Emoly said…
Man. I got excited for a minute thinking that might be a fun thing to do while we're there, go kayaking on the river. Bill and I have been talking about buying kayaks. But I guess that's not on the list of things to do when we're in town... I hope you're feeling better soon (it sounds more like a stomach thing than a water thing...???)
8:54 AM