i'm terrified of the bricks 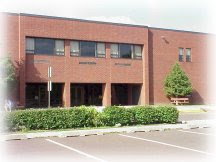 normally the approach to a red brick building isn't so terrifying, at least for me.  which makes this that much worse.  i mean, after all, every day i walk out of my red brick house and take the 380 steps - usually accompanied by flitting birds and bright-white-tailed little bunnies hopping playfully - to my red brick church.  like snow white, or a modern day st. francis, i walk in comfort with nature, from one brick building to another; my ease and genteel fluency are my companions on this pleasant stroll.
which is why it feels so strange to be this uncomfortable with this red brick building.
last night jackson had his kindergarten open house/orientation.  siblings weren't invited, so either shannon or i had to stay home with cade, and i volunteered, because i wasn't sure how i would do talking the long walk to the big brick building at the bottom of the hill, like a death row inmate walking the longest mile.  not that i think school is death - quite the contrary, i'm so excited about his continued growth in learning - but, as a parent, there is something formidable about that great red box.  no matter what i do, i can't shake the image of us walking him down the hill, next monday, not with bunnies and birds, but with black clouds and ominous background music, and standing outside that school for "the moment."
the moment.
the moment is when i have to kiss his forehead and tousle his hair and say (sniff...swallow...ahem), "have a great day in school, honey."  and then he turns his little back to me, so all i can see is a sandy blond head bouncing above that batman backpack, and he walks away from me, towards so many things that i can't control.
and there it is.  that's what i'm afraid of.  it's not the bricks, so much.  they just symbolize exactly what i feel is being taken from me: my control.  what if another child says something mean to him?  what if he is excluded from an activity?  what if he is so shy that he won't talk to anyone?  what if he does something embarrassing and needs a daddy's embrace?  what if he doesn't understand what the teacher is saying?  what if the teacher doesn't understand what he is saying?  what if he wants to use the blue clay but only gets yellow?
look, i see how ridiculous this is, of course, but it is real for me, nonetheless.  jack is going to full day kindergarten, which means that i will have about 6 hours of each day when i'll be worried about him.  i'm thinking that if i didn't feel this way i either wouldn't be a normal parent, or i wouldn't be facing my feelings.  so it's not that i think i'm the first to ever feel this way.  i know i'm not.  and i know things will turn out fine (right?), but it doesn't stop me from getting the cold sweats as we approach the gaping doors of elementary school.  i have to let go, ever so slightly, already.  i have to begin to entrust him to others.  i have to begin to trust that, whatever is said or unsaid, done or undone, my little boy will never be really alone, and will have to face his own brick buildings in his own way.  and i hope he senses from me that i am excited for him, for the journey that he is continuing and the potential that lies in this year for him.  i just hope the sound of my knees knocking doesn't distract him. 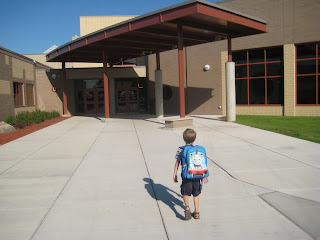 NJ Grandma said…
I am with Julie - but he will be fine and so will you. What is going to happen when he steps out to go to college - remind me to tell you our story when we left our son Michael at Texas Tech and we were heading up to New Jersey!!!!! Good luck Jackson - you will do great :)
1:00 PM

Bill Uebbing said…
I was gonna bring this up when we were there. I wondered how you felt. I wondered how I would feel. Jack is in our prayers. I think he will do better than fine.
5:22 PM

Mary said…
awww...makes me sad for school too! I'll be praying for his little soul and that he may be brave and safe and happy and always comforted.
9:26 PM