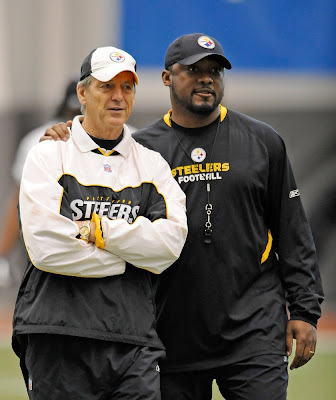 today, in canton, ohio, dick lebeau will be inducted into the national football league's hall of fame.  you might decide to stop reading now, or to ask, "who cares?" but i want to be clear from the beginning: as you know i love the steelers, and loving the steelers has, for the most part, been good to me.  whey then haven't been winning 6 superbowls, they've been usually putting a quality team on the field, and nearly always acting with class.  and know this: the steelers are the team and organization they are today, in no small part because of the presence and contributions of one dick lebeau.  is he superman?  no.  but he is an everyman, a man who gets to live out his dreams day in and day out, and who has made a conscious decision not to take it for granted.

as evidence, consider that, to a man, the recent defensive players of the steelers - grown men, mind you - call him "coach dad," because of the influence he has had not only on their football skills, but on their lives.  he is a humble man, a content man, and a happy man.  he is a teacher of football, an inventor of defensive schemes that cause quarterbacks to wake up in the middle of the night in a cold sweat, and an example of the way to live your life as one who is blessed to be alive.

for far too long his accomplishments on the football field have been under appreciated.  but no longer.  today he is enshrined.  if you'd like to read more about coach dad, check out this great article, and at least watch the 3 minute video below to provide some context to this historic day for the entire steeler nation.

joven said…
beautiful blog..pls visit mine and be a follower.. thanks and God bless..