July 20, 2010
the night before we moved out of new jersey, we were all done packing and there was really nothing we could do in the house, so we took the boys and my mom (who was there helping us with the move) out to play mini golf.  we thought this would be a nice relaxing recreational way to spend our last night in new jersey.

jackson, our oldest, needed constant help with how to hold the putter, and got extremely frustrated when he wasn't as successful as any of the adults.  i was proud of him, though, because he was fairly patient and actually kept trying to get it right and hit the ball properly. 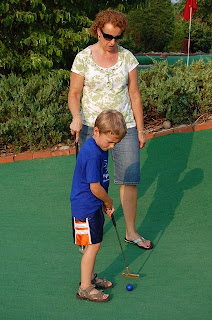 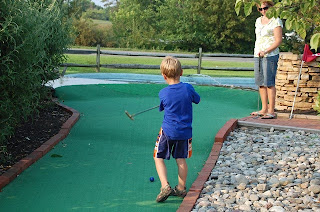 but caedmon, the younger one, was a whole 'nother story; an exercise in futility.  he was interested in mini golf for as long as it took to select the colored ball at the beginning.  from then on, it was more about the flags: 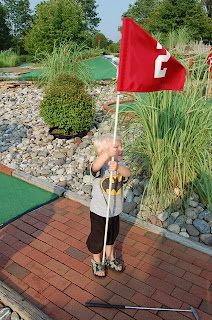 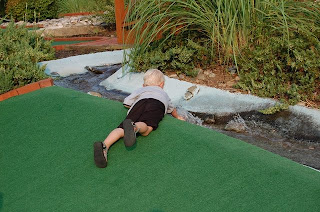 oh, wow, did he love that water.  he was constantly stepping in it, splashing it, trying to swim in it, throwing his ball into it, etc.  while this was mildly entertaining to me for the first 7 to 8 minutes, it began to test my patience after that.  i tend to get a bit competitive on the mini golf course (because, after all, what is more naturally intense than hitting colored balls across astroturf?), and he was cramping my style.  he routinely picked up my perfectly placed approach shot and dumped it in the drink.  he would kick someone's ball into mine.  arrrgghh.
but as soon as i would get irritated, he would do one of those unbelievably cute things that would remind me that staying under par at funtown wasn't the most critical thing i could do on the night before we moved.  just being a dad and loving my family, even in the midst of the frustrations, was the most important thing on that - and any - night.  just ask this guy: 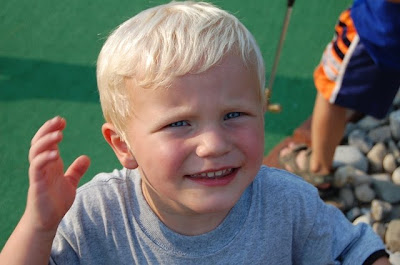