greg vs. the bunk beds

July 16, 2010
when we moved into our new parsonage, we decided that it was time for our two sons to share a room, which meant that we needed to look into getting some bunk beds.  after doing some comparison shopping, we finally landed on a web company, so we ordered the beds online and waited for them to arrive.  finally, on wednesday, the beds arrived around 3pm.  by 4pm i had begun to approach the two giant boxes with a box cutter, and some expectations about proving my dominance over any and all building materials that could be lurking within those elephantine boxes.  with agility and all the confidence that opposing thumbs can generate, i opened the boxes and reverentially pulled out the contents, setting up what would, unbeknownst to me, become an epic battle.  it sort of went like this...

imagine if you will, the voice in my head, a deep and dramatic baritone, in pompous tones: laaaaaaaaaaaadies and gentlemen, welcome to the big fight tonight.  in this corner we have greg, champion wordsmith but generally inept at anything that involves a screwdriver and instructions.  he has had many fights with pre-fab furniture and has lost them all to TKO.  looking for his first victory, he approaches this battle with high expectations, thinking that he'll actually finish in a couple of hours (the crowd roars with laughter).  aaaaaaaaaand in this corner, we have the bunk beds, champions of the heavyweight circuit, daunting and taunting, a mess of pre-drilled boards, various types of unrecognizable hardware, and indecipherable instructions.  aaaaaaaaaaaaaaaaaaaaaare you ready to ruuuuuuuuuuuuuuuuuuummmmmmble?

ding ding.  the battle began.  i started with energy, exuding an alpha dominance over the stained boards and shrink-wrapped hardware.  round one finished with a flourish, and the next couple of rounds followed suit, with me taking the clear lead.  it looked like i might just finally have a dominant victory.  one bed was made, one obstacle (poorly threaded hardware) had been creatively overcome, and i had begun the second bed.  i began to feel cocky.

that's when it all fell apart.  as i began to place one of the sideboards on the second bed, i realized that the instructions showed a tiny dot on the side of it.  i could find no such dot on the board i had left.  in a moment of panic, i looked over at the bed i had finished, which, by necessity, had to be the bottom bed, and i found the missing sideboard.  yep.  all my confidence had been misplaced and all my momentum was gone.  i had to undo what i had done and start over.  i took it like a mike tyson uppercut to the jaw.  i reeled.  i whined.  i even yelled out in turmoil.  i would have shaken my fist to the heavens, but i lacked the energy.  and i wasn't the only one.  by this time, my drill had also lost its mojo, and i was reduced to use a screwdriver while my drill recharged.  with each turn of each screw, the bed mocked me, like captain ivan drago.  i stammered, and even hit the mat a few times, ready to throw in the towel.  if not for my two little boys who needed somewhere to sleep, i would have.  but i thought of my two little guys; i imagined them lying uncomfortably on the hard floor, with kinks in their tiny necks, and i summoned the energy to pick myself up for one last shot.  i basically flung around like a wild man, but in the end i landed the final shot, and, against all odds, prevailed.  i put the ladder together, hung it on the top bunk, and fell to the floor in exhaustion, if not victory.  it was 9:30.

so the 5 and half hour epic contest ended well, with two boys tucked in snugly in the defeated bunks.  i slowly dragged myself to my bedroom, and fell asleep on the floor, in a pile of sore muscles and a nearly-broken spirit.  i awoke on thursday without the ability to grip my coffee mug or walk like a normal human being, but with the sweet taste of victory in my mouth.  i fought the bunk beds, and i won.  and here is the proof: 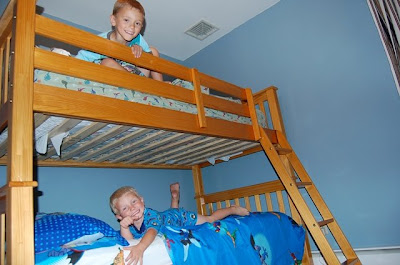 Emoly said…
I'd say that picture alone had to be worth it.

Joel said…
hahaha. you are good with words because even though i was not there for the 5.5 hour fight i had a very vivid image of your battle and could not help myself but to laugh at your inept ability to follow step by step directions. I really wish I could have been there not to help but to laugh. I’m glad to hear that your boys did eventually get a place to sleep.
11:58 AM