why i am not a hunter 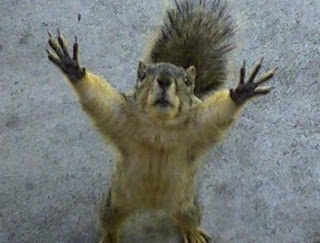 as some of you know, there is no great love in me for squirrels.  next to wasps, they are my least favorite of God's panoply of created animals.  they are basically tree-climbing rats with bushy tails, and, in a former living situation, they enjoyed terrorizing me.
thankfully, that stage of my life is over because i'm not sure i could handle another squirrel pooping on my bed or jumping out of the garbage can at me everytime i go outside to throw something away.  during that stage of my life i tried various methods of...um...disposing of the troublesome varmints, but everytime i got close my guilt overwhelmed me.  what can i say, i'm a lover, not a squirrel-killer.
a story from last week illustrates the point well.  i was driving down a road very near my house and i could see something on the road ahead of me.  as i approached i realized that it was a holy moment.  someone had made roadkill out of a little gray furball, and as it  lied there, a hairy gray pancake drizzled with blood and guts, another squirrel had come to observe.  now, it may have just been trying to wrest some half-eaten niblet from the dead squirrels iron death grip, but i like to think that it was mourning.  as i saw the living squirrel seemingly kneeling over the dearly departed, i imagined that it was paying its final respects to his friend, or even worse, maybe even to his squirrel lover.  as he stood there with his nasty claw-looking feet on the macadum, leaning over the cadaver, he must have been imagining what his squirrel life would be like without his nutty princess.  how would he ever frolic again?  would rustling the leaves ever be the same?   as little squirrel tears welled up in his beady eyes, he wondered if he would ever again climb trees and throw black walnuts at passers-by below.  he clasped his eerily-long fingers and began to offer up a prayer of lament when it happened.
i squished him.
i didn't mean to.  i promise.  i was  just trying to get to work, and i tried to swerve out of the way to avoid the whole sacramental squirrel scene, but he darted at the last minute and i felt the ka-bump of his tiny body under my tire, and a quick check in the rear-view mirror revealed what i already knew to be true: it was now a double homocide.  squirrel newspapers would carry the story in the next morning's news:
MARRIED COUPLE KILLED  Annandale - Police found the steamrolled bodies of two of the Woods' most prominent citizens yesterday, a Mr. and Mrs. Longtooth.  Authorities are still investigating the cause but are calling it a double homocide.  A reward of 4,000 acorns is being offered to anyone with any information about the perpetrators.  Mr. and Mrs. Longtooth are survived by their 14,000,000 children who also live in the Woods, and who look exactly the same as all the other squirrels.  As thrill seekers and adventure lovers, their playful spirits will definately be missed by those who knew and loved them.  One friend and neighbor, a Mr. McRaybee said, "omygosh, this is just nuts, man.  who would do such a thing?  who would kill such wonderful squirrels?"  Services will be held sometime before the town comes and shovels up the carcasses.
i pretty much imagined all of this in the span of about 90 seconds, and i got a little emotional while thinking about it.  seriously.  i'm not kidding.  this is why i could probably not be a hunter.  i have too vivid an imagination about the loved ones and the hopes and dreams of the deceased.  when i kill something, i can't help but see myself as a killer, a cold-blooded, car-wielding murderer.  the least i can do (and the most, really) is feel a bit of remorse for the wake of death my simple drive to work created.  so let's be careful out there - the road is a dangerous place.  not just for you, but for them.
and don't even get me started on all those bugs on my windshield.  you know they had families, too....

Joel B said…
I killed a squirrel the other day too, but I did not try and swerve out of the way
12:57 PM

Unknown said…
Rich came across the same scene the other day but he wasn't driving fast enough to get the second squirrel.
3:08 PM

Kerri Smith said…
Haha! I hate them for the sake of my dog, who really really hates squirrels ("ess que's" as we have to call them at home, he's too familiar with the whole word.) Bbut I hate to see them dead anytime, ever! Did you ever hear the Squirrel Song on my myspace page? It never happened and I'd be horrified if it did, but it's the plight of Samson in the back yard. http://www.myspace.com/kerrileesmith
2:33 PM