April 13, 2010
amidst the cardboard chaos that we call home these days (we're packing, and there are boxes everywhere), my body has decided that it is a good time to get sick.  i don't feel as bad as death, let's say, but i don't feel good either.  and i don't' have much of a voice.  mostly i can just sort of bark like a seasick seal.  it's not pretty.

but in the middle of all of this, i took some time to reflect on what the heck is going on with my beloved pittsburgh steelers, and just wanted to note that here on my blog today (even though i know most of you detest these sports posts and would rather see adorable pictures of my kids).

first of all, i woke up yesterday morning with the anticipation of waiting to hear from a district attorney in georgia about the case against our franchise quarterback, ben roethlisberger.  i knew that the announcement was supposed to come sometime yesterday about whether or not they would be pursuing criminal charges against him for sexual assualt/rape.  but before i even had a change to find out what time the presser was scheduled for, i received a text which told me that one of our star recievers, the mvp of superbowl XLIII had been traded to the jets, and all we got for him was a fifth round pick.

so i spent the morning trying to not sound like a trapped wildebeast, working to make sense of the santonio holmes trade, and waiting for news on big ben.  at two o'clock the district attorney from georgia got on TV and, altough you could tell he wanted nothing more than to prosecute ben's butt, he told the world that he did not have enough hard evidence and that "we do not prosecute morals, we prosecute crimes."  the outcome was great for ben, but the message was clear: ben roethlisberger did something bad, and he is only walking away from this because there wasn't enough evidence to prove it.

later in the day the ownership issued a statement that essentially said that ben will still have a price to pay, whether that gets levied by the league or by the team, and that he has a great deal of work to do to earn back the trust of the organization, his teammates, and the fan base.  and then ben, looking like a total creeper, also issued a statement, 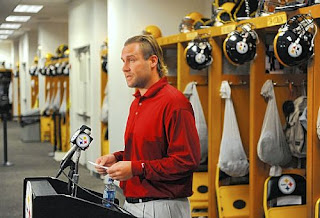 saying that he wants to make things right and earn back people's trust.
all of this, together with other recent stories, like those about tiger woods, cause me to remember that these guys are not heroes; they are just guys.  some of them are great guys.  some of them are not so great guys.  some of them make great choices.  some of them make good choices most of the time.  and some of them have made some really terrible choices.  like me.
that's right.  i've made some pretty bad choices in my life.  but i've been fortunate because i've never had those choices broadcast on national tv and scrolling across the news ticker in times square.  i've never had to get up in front of cameras, facing my shame, and committing to changing my ways.  i don't approve of ben roethlisberger's lifestyle right now.  in fact, i'm disgusted by what he has done and who he has become.  but i also feel bad for him.  it's one thing to face the consequences of your actions.  it's another thing to do it in front of so many people.
and one more thing: i truly hope that he can get his life changed.  i hope that this very public brokenness leads to some real serious change in his life.  not for the steelers' sake.  but for his sake.
as a fan of the steelers, i will still root for ben to do well on the field.  but as a human, i will be rooting for ben to do well off the field.  which, in the end, is way more important.

Joel B said…
ok so he was not wearing a suit and his shirt was not even tan. i was probably to distracted by his nasty hair to notice.
1:29 PM

NJ Grandma said…
Feel better Greg - do not too much about the Pittsburgh Steelers :(
5:03 PM

NJ Grandma said…
do not know too much about the PS - excuse the previous post
5:04 PM