the countdown is over

April 23, 2010
many of you realize that my almost perfect 2009 sports year didn't end with a good flavor.  while i got to enjoy the gators win a national championship, the steelers win the superbowl, the pens win the stanley cup, and the yankees win the world series, the steelers finished the year by falling into a terrible slump and sliding right out of a playoff spot.  at that time i wrote this post to talk about hwo bummed i was and to start a countdown to the 2010 nfl draft.  well, that moment arrived last night, and despite an awful offseason full of bad behavior, moral grandstanding, poor reporting, and rumor mongering, we have officially put an end to the 2009 season and are moving forward now.

with the 18th pick in the first round, the steelers drafted maurkice pouncey, 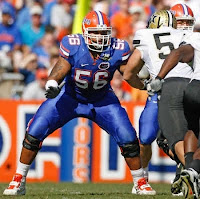 a center from the university of florida who almost certainly be able to step in soon and improve our offensive line.  this is not a sexy pick by the steelers, but a very good one, in my opinion.  and as a steelers fan during this chapter of the franchise's history, i'll celebrate any good news i possibly can.  for example, i'm pretty sure big ben went to the sheetz station to get a few sandwiches and didn't assault anyone, or get charged for it, anyway.  so, that's the best news i've heard in awhile.

anyway,  it's good to be a sports fan right now.  we got the yankees starting strong, the penguins in the playoffs, and the steelers making draft picks trying to recover from their turd of a year last year.  good times.