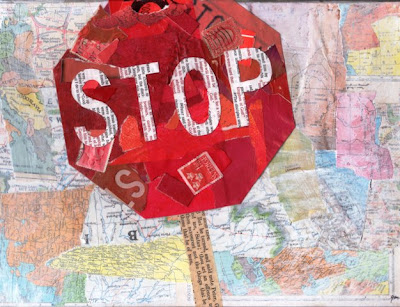 lent 2010: stumbling block
mixed media collage
no. 5 of 7
march, 2010
gregory a. milinovich
as we continue to journey through lent with our focus on simon peter, we spent some time yesterday remembering the story in which Jesus asked his disciples what people were saying about him (matthew 16:13-23).  this occured in the northern part of palestine, where Jesus did a great deal of his itinerant ministry.  we remember this story pretty well: the disciples told Jesus that some said he was john the baptist and others said he was elijah.  then he got a bit more direct with them and asked them who they thought he was.  the Bible doesn't say this, but i imagine them sitting around, heads looking straight down, kicking at the dirt, unsure what to say, and scared to say something wrong.
except for peter, who never had a problem speaking up, it seems.  in fact, the title of yesterday's sermon was "the man with the mouth."  peter breaks the awkward silence with a bold statement: "you are the messiah, the son of the living God."  and Jesus blesses him right there on the spot for it.  "good job, peter!  you're absolutely right, and i tell you what, you will no longer be known as simon, but as peter."  seems like an interesting time to be changing names, but Jesus is essentially saying that this man will be the rock - the foundation - for the future of this coming kingdom he keeps teaching about.
the other disciples must have snickered at that.  how could peter be the rock?  he was anything but steady: moody, loudmouthed, boisterous, excitable and so on.  simon was no peter - he was not a rock.
but Jesus knew what he was doing.  he knew simon's sins and shortcomings.  he knew exactly who he was dealing with in peter, but he chose him anyway.
after this story, Jesus tells his disciples that, even though they are up in the north right now, traveling around and doing good works, that he must soon head to jerusalem, where he must die.  and, true to form, peter freaks out and says what is on his mind: "no way, Jesus!  that isn't how it works!  of course you need to go to jerusalem, but not to die; you've got to begin establishing your revolt and your overthrow of the romans.  why are you saying you have to die there?  don't be ridiculous!  stop this crazy talk; that's not how it's going to work!"
and Jesus responds with those famous words, "get behind me, satan.  you are a stumbling block to me."  when we read these words we tend to focus on the "satan" part (whoa, strong words from Jesus), but we often miss the "stumbling block" part.  Jesus has just told peter that he's a rock.  now, just a couple verses later, he is telling him that this is not the kind of rock he needs.  he meant a rock to build on, not one to trip over.  Jesus had to get to jerusalem so that God's plan could unfold and spread beyond jerusalem to the ends of the earth.  simon peter would continue to learn what that meant during his time with Jesus.
what about you and i?  this story begs the question for us: what kind of rock are we?  are we something God can use to help build the kingdom, or are we getting in the way?  we'd like to think, of course, that we are part of the process, part of the coming kingdom, part of God's plan here on earth, but i wonder if sometimes we aren't more like peter than we like to admit.  isn't it true that our prayers sometimes take on the shape of peter's earnest plea: "no Jesus!  not that way!  i want your plan to be done, your will to be done, but not that way."
stumbling block.  stop sign.  we get right in the way of God's work of radical love.  all because we think we know how it should go.  or, more often, because we're not willing to do what it takes to follow this suffering servant.  we think, "God, i know i will need to give up this habit/relationship/behavior, but not yet.  this isn't the right time.  look at all the bad things that would happen if i stopped it now.  i'll do it in a couple of months when things slow down."  you see, just like peter, we think we know the right way; we think we know what is best and how things should work.  but when we do that, we are less like Kingdom-builders and more like stop signs.  the question for each of us this lent is: which one are you?  are you building or getting in the way?

Crafty P said…
really good stuff- never really thought about that Scripture that way (why not?). thanks for the enlightenment. Will ponder what kind of rock I am today.
3:35 PM

greg milinovich said…
glad i made you think. that is one of my goals in life: to make people think. glad it worked.
10:27 PM