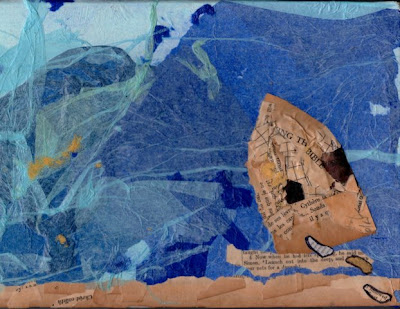 "lent 2010: into the deep"
mixed media collage on hardcover book board
feb 2010
gregory a. milinovich
you may remember from my post last week that i haven't really given anything up this lent, except perhaps some time which i am using to work on a collage each week which corresponds to the text we are dealing with in our worship at church.  i mentioned that we are focusing on the story of simon peter all through lent, and this week our text was luke 5:1-11:

1One day as Jesus was standing by the Lake of Gennesaret, with the people crowding around him and listening to the word of God, 2he saw at the water's edge two boats, left there by the fishermen, who were washing their nets. 3He got into one of the boats, the one belonging to Simon, and asked him to put out a little from shore. Then he sat down and taught the people from the boat.

4When he had finished speaking, he said to Simon, "Put out into deep water, and let down the nets for a catch."
5Simon answered, "Master, we've worked hard all night and haven't caught anything. But because you say so, I will let down the nets."
6When they had done so, they caught such a large number of fish that their nets began to break. 7So they signaled their partners in the other boat to come and help them, and they came and filled both boats so full that they began to sink.
8When Simon Peter saw this, he fell at Jesus' knees and said, "Go away from me, Lord; I am a sinful man!" 9For he and all his companions were astonished at the catch of fish they had taken, 10and so were James and John, the sons of Zebedee, Simon's partners.
Then Jesus said to Simon, "Don't be afraid; from now on you will catch men." 11So they pulled their boats up on shore, left everything and followed him.

as i read the text i was struck with the words "into the deep."  it seems God is always calling us into the deeper places, doesn't it?  we might be content in the shallow waters, or in the places we are used to, but God keeps calling us deeper and deeper.  and what is even more remarkable is that in this particular story james and john and simon peter follow this crazy rabbi Jesus.  they leave everything.  they are convinced that there is something more - something deeper -going on with this man and are willing to leave everything else behind.  i am compelled by their rash decision.  i picture the nets lying on the beach.  the boat.  john's favorite outer shirt that his grandmother made him.  all of this, just left on the boat, on the shore, behind them.  they are stepping out into deeper places.  i hope, when Jesus invites me with a similar opportunity, that i am as willing to leave my stuff behind and go wherever he would take me.

Mrs. Milinovich said…
I love this collage. It looks like the water is actually in motion. Great technique.
The deep water can be scary, but who wants to swim in an inch of water? I am reminded of C.S. Lewis's The Last Battle. No matter how far we go, He is still calling us "further in and higher up". It's so exciting. If we could just concentrate on the adventure and not on what we have left behind, it would be both easier and so much more fulfilling.
2:21 PM

thanks again for being my best fan. :)

glad you liked it. i used tissue paper soaked in wallpaper paste. weird technique, but it works really well.
6:58 AM