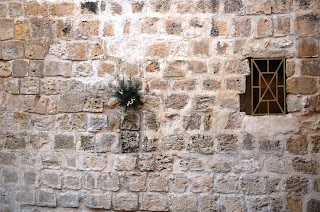 Shalom from the holy land. As I sit down to write this, it is late here, Monday night. I’m pretty tired from a FULL day of learning and seeing. Just as I had hoped, I spent the day looking through windows to the past, windows to my faith, and windows to hope. I don’t want to bore you with every detail, but I will give you at least a thumbnail sketch of what we did today. 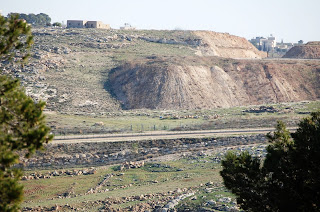 After breakfast we hopped on our bus and left Jerusalem and entered the west bank. I hate to admit that I didn’t have a very good understanding of what was going on between Israel and Palestine, and the very real and day-to-day problems that this tension presents to the people here. The first place we went in the west bank was the shepherds’ fields, the traditional site for the place where the shepherds were watching their flocks when the angels appeared to them to tell them of the birth of Jesus. We got to see the terrain, get a sense of the incredibly difficult work of shepherding, and even go into a cave that would be the kind of cave shepherds in those days would often spend the night. Inside the cave we read the shepherds’ story from the Bible, and prayed together (we continued this practice at every site we visited). 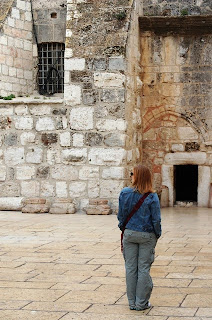 After the shepherds’ fields we headed to a major souvenir shop run by Christians in Palestine, full of olive wood carvings and every sort of religious trinket and icon. Then we headed to the church of the nativity, a church currently shared by four different sections of Christianity, and the oldest functioning church in the world. It was built by Helena, constantine’s mother in the 5th century. It still stands. And it is gorgeous. It is thought by many to be built over the actual cave where Jesus was born. Whether this is true or not is certainly debatable, but it was somewhere in this vicinity, to be sure, and it is clear that very early on Christians were worshipping in this site as a very special place. We were able to see ancient mosaic work from the original construction, and share some special moments in the cave remembering the birth of Christ.
After spending some time there, we headed to a restaurant in Bethlehem for lunch. Then it was the Bethlehem Bible College to learn a great deal more about the Palestinian plight in Israel, and particularly what is happening to the Palestinian Christians. Palestinians who aren’t even granted citizenship to a nation, live in a very tense situation, in land occupied by Israel, who not only is building huge settlements in the West Bank, but who has also built a huge wall for security reasons that keeps Palestinians in. the only way they can get out is through a highly secured checkpoint. Most of the Palestinians are not permitted to leave. Some are granted permission, but mostly for work situations. So, there is not peace right now, and tensions seem high. 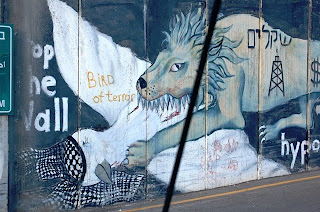 Then we drove back through the checkpoint and to Mount Zion, where you can find the traditional site for the upper room. From there we moved over to the house of Caiaphas, the high priest, where Jesus was taken after being arrested in Gethsemene. It was also the place where peter denied Jesus, and where Jesus was kept overnight before being taken to Pontius Pilate. This was also a fascinating place, and we got to see the ancient steps leading down the mountain to the garden of gethsemene, steps which some think are the same ones that Jesus walked on. 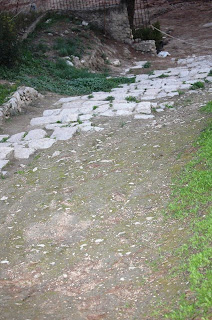 In the midst of all of this I’ve been learning all kinds of things which will change the way I understand scripture. After learning about shepherds, I will now have a different picture in mind when Jesus talks about being the gate. I will have a different understanding when I read Psalm 88, and the darkness of the pit, after seeing the captivity pit in Caiaphas’ house. I will think differently of the locusts that John the Baptist ate. And best of all, for those who know I was dying to see it (pun intended), I got to see Gehenna, or the Valley of Hinnom.
So its been an awesome day. Tomorrow we are planning to spend more time in the old part of Jerusalem, including the Garden of Gethsemene and other places, and I hope to share some of that with you tomorrow.

cathyq said…
Thanks for the pictures and the thoughts. I look forward to hearing more of your further understanding of what happened so long ago and what is happening there now. Keep enjoying it.
7:41 PM