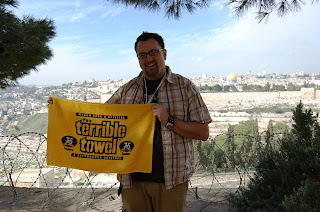 we have finished our third day in the holy land. Shannon and i are both absolutely spent from a very full day, but i wanted to take a moment and let you know what we’ve been up to today on this side of the world (i still can’t get used to the fact that i live most of my tuesday before most of you even really get started with your tuesday…weird).


anyway, we started off the today on the mount of olives, and walked the traditional route for the palm sunday procession. the first thing i would tell you about this is that it is a steep downhill walk! Shannon and i joked that it never looks like this in the children’s sunday school material. we stopped part of the way down to remember how Jesus looked over the city of Jerusalem and wept for it. i got a picture there looking west over Jerusalem with my terrible towel, just to represent steeler nation in the holy land. 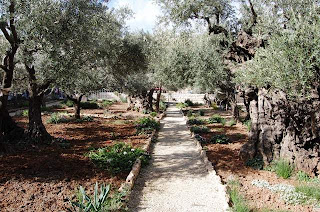 we finished the walk down the mount of olives to the bottom where the garden of gethesemene is located. we were able to see and touch olive trees, and to spend some time in personal devotion in the very place where Jesus prayed to the point of his sweat becoming like drops of blood. as i sat in that garden, i was reminded of another story about a garden. it is a story about the origins of all things, and it all begins in a garden. in that story, when given a choice between God’s will (“do not eat of that tree!”) and their own will (“you will become like God”), Adam and Eve chose their own will. and we have all been ratifying that decision over and over again since, in the gardens of our own lives. but as i sat in that garden full of ancient olive trees (some of them are over 2,000 years old!), i remembered that Jesus’ time in the garden also involved a battle of the wills. but even as he prayed to the point of drenching the ground with sweat, he said, “not my will, but yours be done.” i was reminded of how much i desire that my life would be like that prayer of Jesus in his dark moment: not my will, Lord, but yours. let your will be done. we were able to celebrate communion as a group, and have a service of anointing in which the laity anointed the clergy as a reminder of our call in ministry – a really moving moment. 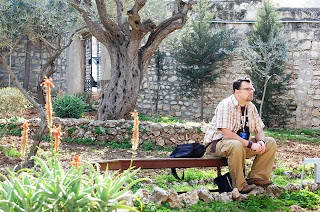 after the garden, we went by bus to the joffa gate, where we entered the old city portion of Jerusalem. We ate lunch there and then went to the church of the sepulchre, which is the main traditional site for the death, burial, and resurrection of Jesus. this is now all covered by a church which is decorated in traditional greek orthodox style. let’s just say ornate doesn’t even begin to cover it. even though it doesn’t look the way you and i might draw it up in our imagination, it was still pretty cool to be in the place where so many have worshipped the risen Lord, believing that he died and rose at that very place. 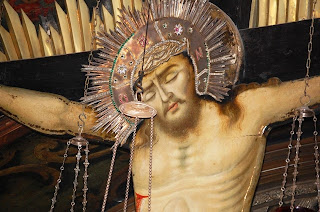 from there we walked backwards through the via dolorosa, through the winding stone streets of Jerusalem, lined with shops and vendors. along the way we stopped at several of the stations, and even got to see some stones from the road from the time of the roman occupation (around the time of Jesus).

after this we walked to the pool of bethesda where Jesus healed the crippled man in john 5. this was one of the most stunning parts of the day, especially since we were told that there really is no historical debate about the accuracy of this place. there is almost complete agreement: this is absolutely the place where Jesus healed the man. we got to look down into what is now an empty rock pit, and it was just breathtaking. 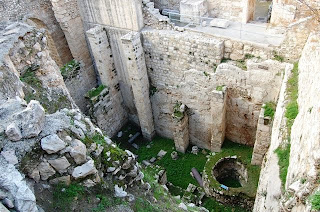 we finished our touring by going to the western wall, the place where the religious Jews go to pray, as it is the closest spot to the old site of the temple that they are willing to go, without fear of stepping on the ark of the covenant which is believed to be somewhere under the mountain where the temple once stood (and where the Muslim mosque called the dome of the rock now stands). we got to go there and offer our own prayers in the wall. 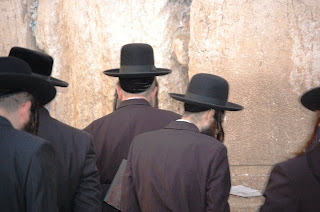 one of the things we learned today (we learned a lot!) was that the timing of Jesus’ palm sunday entrance into Jerusalem was very important. this occurred at the passover. at this time, the governor of the area, pontius pilate, would have also come to Jerusalem from his normal home in ceaserea, to stay in Jerusalem during the passover for fear of jewish revolt. as word would spread of the governer’s arrival to Jerusalem from the west, those who were loyal to the romans would come to the city gate and form a procession with him as he came riding into the city. it would be a procession of power, demonstrating the strength and might of the romans, intended to keep the jews in their place. on palm sunday, Jesus seemed to provide a kind of alternative to pilate’s entrance. Jesus also entered the city, riding a donkey, but he came from the east, and his procession was not about power, but about resistance. about peace, yes, and also about justice. it is a good reminder to us that the message of Jesus has always been, and continues to be, a counter-cultural one. even in places where the lines between Christianity and culture have been blurred, there is no question that the teachings of this rebel Jesus go against the grain. as we traveled throughout Jerusalem today i remembered this about Jesus, and how it ultimately got him nailed to a cross outside the city gates as another sign of the roman power. the empire had won. or so it seemed. they had never expected the kind of revolt Jesus came to bring: a revolution of love. a revolution that you and i are still a part of, if we dare to be.
thanks for reading. i hope you are enjoying these posts. tomorrow we are headed north to galilee, and i plan on sharing some of that with you tomorrow night. have a great wednesday.

"they had never expected the kind of revolt Jesus came to bring: a revolution of love. a revolution that you and i are still a part of, if we dare to be."

Out of what you have posted and what I am experiencing through you, this has stood out the most for me. I knew that the Palm Sunday procession was important because of the reasons you mentioned. Yet the reminder of still being a part of this revolution if we dare to be, to change the future, our own future and those around us, is simply amazing. Thank you for that simple reminder of love.
10:12 AM

julie said…
yes, thanks for journaling and allowing us to be with you during this process. it is such a special gift that you as a christian can experience these places that we have always seen on the "sunday school papers..."

i pray that you will continue to be blessed on this physical yet spiritual journey.
4:04 PM

cathyq said…
Thanks again for the vicarious visit to that "Holy Land." The sites look amazing. Keep posting. We are enjoying it and being blessed by it.
9:05 PM