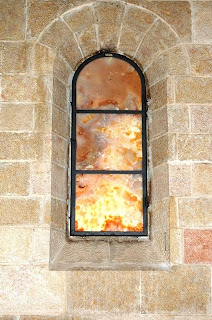 let me start off today by saying how glad i am to know that many of you are following along here on my blog and on facebook, sort of sojourning with us through the holy land. i appreciate your company as we look together through windows into the past, windows that reveal to us a clearer, brighter picture of Jesus Christ of Nazareth, and which help us understand the scriptures left to us. i’m certain that i’ll be returning to these windows time and time again in my ministry, using what i find here to enhance my ability to tell the story of this Jesus. 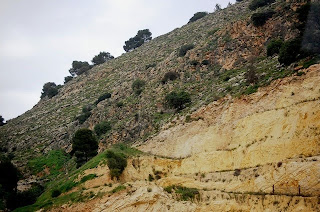 and i was able to look through some pretty amazing windows today. we started the day off real early because we had a long drive north out of jerusalem through the jezreel valley, towards the mountains of the north. our first stop was nazareth. as we entered the city, we passed these huge rocky cliffs, and we learned that these cliffs were very likely the ones that the people wanted to push Jesus over after he claimed to be the fulfillment of prophecy. according to luke 4, this was the very beginning of Jesus’ ministry in this region in the north known as galilee, where Jesus had also grown up. he had been away for some time, and when he returned he came to nazareth, his hometown, to gather with his friends at the synagogue. by the end of that day they were trying to throw him out of town, and, as you can see from these cliffs, probably kill him. this is how Jesus set his face towards jerusalem, even as he began his ministry here in galilee. 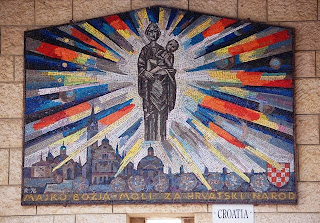 in nazareth we went to a really cool church believed to be built on the site where mary received the annunciation, the news that she was going to be the mother of the Messiah. the church there now was built in 1969, but there is evidence of early Christians worshipping on this site in nazareth as early as the 1st and 2nd centuries! the church there now celebrates the universal nature of the church by displaying large mosaics and other art from various nations around the world depicting the virgin mary. of course i particularly enjoyed the one representing croatia. 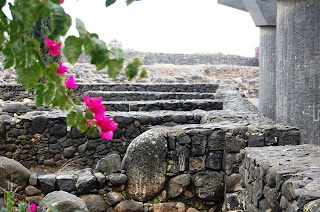 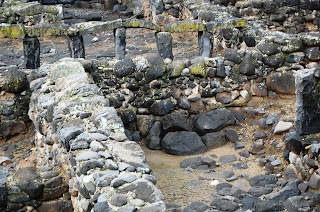 after nazareth we stopped briefly in cana, where Jesus attended a wedding and turned water into wine after the hosts had run out of wine. from there we headed to capernaum, the town where Jesus probably went to live following his “eviction” from nazareth. at the very least he spent a great deal of time in capernaum, which was a prime location as the best fishing on the sea of galilee was in this area, and local fisherman and farmers would probably sell their goods here. picture capernaum as a fairly busy port community, smelling strongly of fish and filled with the noise of merchants doing business. this is where Jesus called many of his disciples. as you can see from the picture, archeologists have been able to find ancient remains of the homes in this area. these homes were very small and packed closely together. we can tell that they did not have stone roofs, but probably had palm tree roofs. since this region gets very hot much of the year, the people of capernaum would have been able to go up on the roof and put the branches across the stone wall in the morning, to keep out the heat of the sun, and then remove them at night to allow for the cool breeze off the sea. they were able to do this because there were steps leading up to the roof on the outside of almost every house here. remember the story of the paralytic man, and how his friends weren’t able to get him into the house where Jesus was because it was too crowded, so they went up to the roof and lowered him in that way? we see here in capernaum how they would have been able to do this! they would have simply used the steps on the outside of the house. 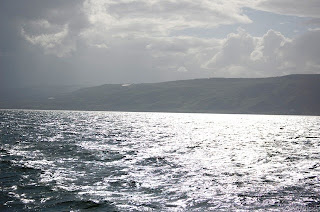 following capernaum, we stopped briefly at tabgha, the traditional site of Christ’s miracle with the loaves and fishes. then we went right down to the sea of galilee and got on a boat, which we then rode across the sea on. during the ride across the water, we celebrated communion. when we got on the boat it was a little windy with a few sprinkles, but as we moved further out it got darker and darker, and we all were remembering another group of people out on this very body of water so many years ago, when another storm whipped up. we were hoping not to have to repeat this story! as i sat there with the galilee wind in my face and the sound of the water underneath, i looked through yet another spiritual window. we all prayed the Lord’s prayer, and when i said the words that i have said thousands of times, “thy kingdom come, thy will be done on earth as it is in heaven,” i was moved to tears. after all these centuries and millions of people, here i am. and i, too, want to be a part of this kingdom that this itinerant teacher taught about in galilee. 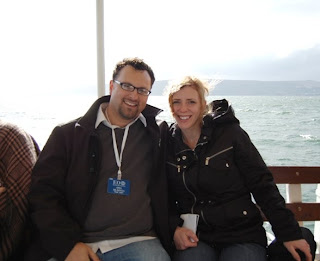 after that experience we went to the traditional site of the sermon on the mount, where i met Sister Vivi, who asked me to send a message to her blood sister living in new jersey. so, Sister Bianca, i will call you when i get back to the states, with a great message from you sister in the holy land. if you are reading this, she’s doing well and, as you can tell, she looks great! 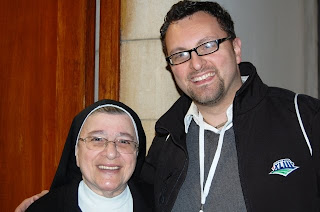 we ended the day by the jordan river, where we all got to see and touch the water in which Jesus was baptized. Bishop Devadhar, our bishop, who is traveling with us, sprinkled us with water from the river as we remembered our baptisms in Christ. 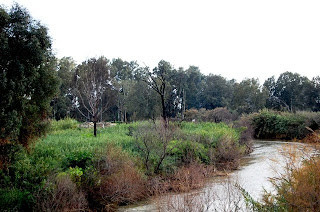 and so it has been another full day. one thing that really struck me today as we were up north in the region where Jesus did so much teaching is how this was not just a jewish thing. there were both roman and greek cities in this region during the time of Christ. in fact, many of the inhabitants of nazareth were people who were only there temporarily since there was work in a nearby roman city. what this tells us is that Jesus wasn’t just teaching the jews. he was rubbing shoulders with greeks and romans, too. they, too, would have seen his miracles and taken his message to their families and friends in their homelands to the east. once the apostles and paul started writing their letters (which now comprise much of our new testament), there were already churches in rome and ephesus and corinth and phillipi. these were greek and roman cities, where Christ’s message had spread, probably, in part, because of his ministry here in galilee. from the very beginning, Christ’s message was not just for jerusalem, but for samaria and greece and rome, and for the very ends of the earth. thanks be to God!

Paula said…
Awesome and amazing! Loving every word and picture....thanks <3
9:52 AM

Anonymous said…
You know I have been with you this whole time, I know a real bummer for you, but your blog has been another blessing in this trip. You help me relive the journey again.
12:31 PM