February 05, 2010
today was a day of extremes, in a way, or at least a day of earth, wind and…water. strangely enough, it all started with ice. we woke up to a threat of snow in jerusalem, which turned out to be hail. this hail came down in huge chunks of ice and caught fire as soon as it hit the ground. okay, not really. that’s in egypt. but seriously: hail. i didn’t really come to israel for falling ice. 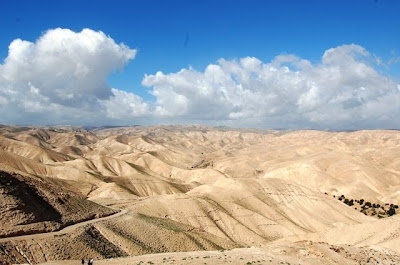 we drove east out of jerusalem into the judea desert. this is the very wilderness where john the baptist lived. i, for one, have never been to a desert before, so this was a new experience for me. but this isn’t your run of the mill desert (although i did see a tumbleweed blowing across the road in what must have been the most cliché moment of the day). no, this desert has no sand! it’s just rocks and dirt. you can see from the picture that it is just hill after hill of dirt and rock. this is also the desert where Jesus went after his baptism in the jordan river, and where he was tempted three times during his forty-day fast. the tempter told him to turn all the rocks into bread, and, if you see this terrain, you soon realize that this was not just a temptation for Jesus to sate his own hunger, but to use his power to make enough food for the whole world to eat because there are rocks everywhere! Jesus, of course, realized that the world needed more than just bread, and he continued to set his face against the desert wind for a more difficult future, one that allowed him to be the very bread of life. 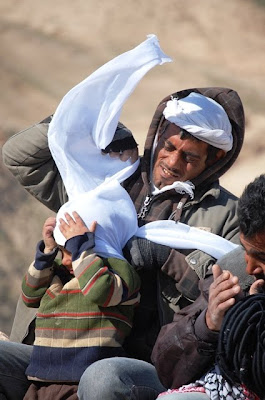 speaking of the desert wind, while we were in the desert, we read the story of the temptation and of the good samaritan (this is the area where those travelers would have traveled), and some bedouins came over to us trying to sell us some of their goods. while we were all there hearing the word read aloud in the desert, the wind began to build bigger and bigger until it was a strong push against our bodies. it felt as if the desert just wanted to give us a small glimpse of its fury, a thumbnail sketch of what it must have been like for Jesus for those forty days, and what it must be like for the bedouins all the time.
if you’re keeping track at home, we’ve had ice (hail), earth (stones), and wind. what could be next?

camels, of course. we arrived in jericho, and after seeing the traditional zaccheus tree, we stopped for some lunch where there was a camel that you could ride. his name was sami. Shannon got to get on him and go for a quick ride. sami even smiled for the picture. 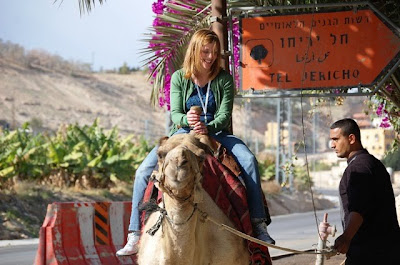 later we got to go to qumran, the site where the dead sea scrolls were found. in case you’re not up on your archaeological facts, the dead sea scrolls have been very very useful in our continued work of translating and understanding the hebrew scriptures, or what we call the old testament. for scholars they are a priceless treasure. and the cool part of it is that they were discovered by a desert bedouin goatherder who was throwing rocks. he heard something break after he threw one of the rocks in a cave, so he went it to see what had broken. hoping to have found some treasure, he was disappointed to see that it was just a bunch of parchments in old clay pots. he sold them as antiques and, of course, they ended up becoming a major factor in old testament translation and scholarship. all because of some rocks thrown into a cave. it kind of reminds you of how our lives are made up of so many little moments, many of which do not seem meaningful at all. but who knows, a great treasure could be behind any traffic jam or fast food employee. 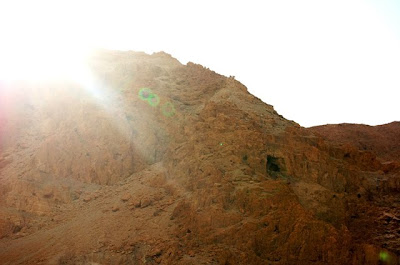 we ended the day at the dead sea, where only three from our group of fifty decided to get into the water. i was one of the three. the dead sea is the lowest elevation on dry land on planet earth (some 1,400 feet below sea-level), and one of the saltiest bodies of water. since it is 33% salt, the water allows matter to be more buoyant, and that matter includes human bodies. 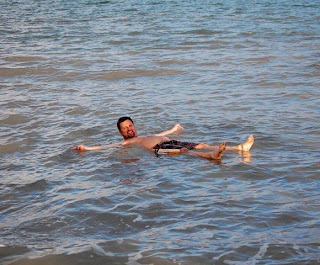 so if you go into the dead sea, and you lie down in the water, it holds you up. in fact, it is very difficult to sit down. just be careful not to get it in your eyes or mouth. just take my word for it, okay? good. 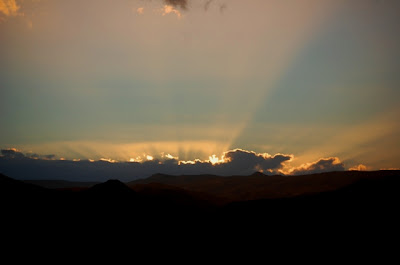 and the day ended with a sunset. a day of extemes: from the violent desert wind, to the supportive salt water of the dead sea; from the percussive staccato of the morning hail, to the quiet holiness of qumran; from the memories of the shouts that crumbled the walls of jericho, to the beautiful peace present in the sun setting over a land in desperate need of some peace. and as if to top it all off, before the day was over, a rainbow descended right in the desert near the dead sea, as if a reminder that the One who created heaven and earth is still the God of day and night, of earth and rock, of water and wind. and this is not a God who delights in the violence of a broken creation, but one who delights in redeeming it. 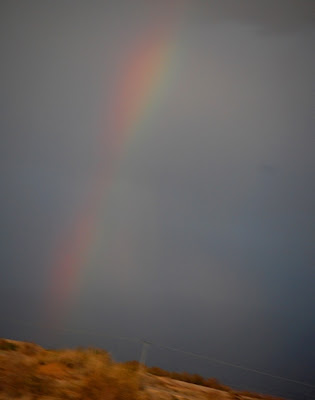 Emoly said…
Well, if that wasn't a perfect day in the Holy land, I don't know what is. And thank goodness there wasn't any fire.