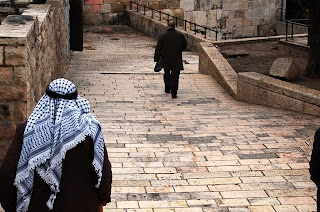 for those of you who are wondering, we are home safe.  we got up at 1:45 am on saturday morning in jerusalem, and were home by 9pm on saturday night in new jersey.  of course we were traveling west, so it was actually more than 24 hours.  needless to say, it was a long day, and we're happy to be safe at home, even if it is covered in snow.

i never got a chance to write about our last day in the holy land, so i thought i'd give you a quick recap.  we had friday morning free, so shannon and i (along with several others) decided to head back within the old jerusalem wall into what is called "the old city" for some shopping.  there are "streets" there that are really just paved sidewalks lined with tiny little shops, full of vendors trying to sell you their goods.  many of the shops were just clothes or shoes or religious trinkets, but we found some cool shops, including one that sold all kinds of interesting spices, at really good prices.  this picture shows how beautiful the spices look. 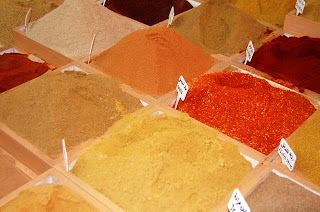 there was also a fish store that we walked by in the morning, when it had some fresh fish lying out.  when we walked by later, they had added their most recent catches, including this guy: 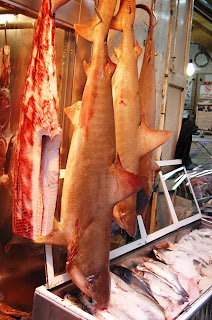 after the old city, we went to the holocaust museum in jerusalem, which was a very difficult expeience.  it is an amazing museum that thoroughly tells the history of the whole terrible ordeal, complete with videos and personal stories and pictures and items.  it was emotionally straining to say the least.
from there we headed to ein karem, the traditional birthplace of john the baptist.  once again it is a site of ancient christian worship (there are christian markings there from some 1500 years ago), that has now been covered and marked by an extremely ornate church.  here is a painting from inside the church: 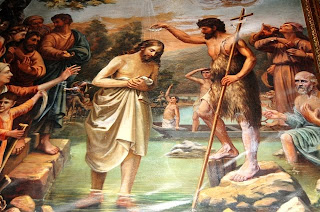 the weather on friday in jerusalem was awful - rainy and cold.  but we all really wanted to go to the garden tomb, which is another possible location for the crucifxion and resurrection of Jesus.   there is much dispute among scholars about the actual site, but this location is often focused on because of a rock formation there which resembles a skull. 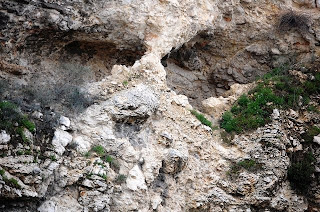 there was a tomb found there that looks exactly like what a tomb from that era would have looked like.  who knows if it was really the site or not, but we were able to celebrate communion as a group there, which was very moving. 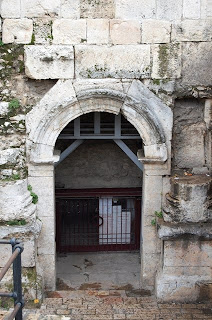 an ancient roman entrace to the wall around jerusalem, near the damascus gate
i want to bring some closure to this trip, by writing one more post about the whole experience, but i think i'm going to need a couple of days to sort of process everything and let it all sink in.  i looked through so many windows this week: windows into the past; into scripture; into the social situation there, and the need for peace with justice.  windows into myself, and my own spiritual journey, too.  so give me a few days to continue to make peace with what i've seen and heard this last week, and i will try to sum it up.  for those of you who have been following along and reading, thank you.  i hope you enjoyed your participation in my trip.  may God - the God of us all - bless you.
grace|peace,
greg.

NJ Grandma said…
Welcome Home Greg and Shannon - followed your blog and sounded like you had an incredible time. Glad you got home safe and I am sure the boys were so glad to see you. Take care. ~Gail~
4:53 PM

Cindy M. said…
Glad you are home safe. What a beautiful tribute to your pilgrimage to the Holy Land.
8:17 AM

Emoly said…
I love the use of windows. What a great way to "look" at your trip and the experiences you had. It is also a wonderful way to let us see it all through our own windows. (in case you didn't know this about me, I love themes)
9:25 AM