i am a pilgrim

January 30, 2010
i am a pilgrim.
that statement is true for me in many ways, of course, but never quite so literally as today.  today i am not just on the journey of life or faith, but i am much more specifically on a journey towards jerusalem.  i will drive to an airport, get on a huge jet and fly to london.  there i get on a different plane and we fly to tel aviv.  then we get on a bus and ride to the ancient city where we will be staying for the week.  it's a far cry from walking or riding a colt, but it's still a pilgrimage, albeit a modern one.
as i have prepared for and grown in excitement about this trip to the holy land, i have been drawn to the psalms of ascent in the hebrew bible.  psalms 120-134 are called the 'psalms of degrees' or the 'psalms of ascent.'  scholars disagree a bit about why these are called psalms of ascent, but there is agreement that they were songs that would have been song on the approach to jerusalem, and more specifically, to the temple (the disagreement is about whether they were meant as pilgrim songs on the long journey to Jerusalem or for the actual climb up the stairs to the temple).  one can picture the groups of families and communities, tired from  the journey but so excited for the time in jerusalem, singing these songs with loud voices, in minor keys, perhaps with some tambourine or other accompaniment.  if you listen closely to your imagination, you may be able to hear these joyful songs. 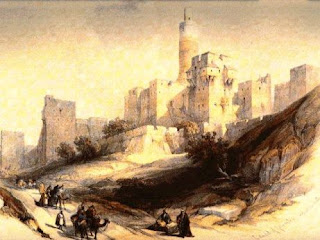 so i have found myself immersed in these songs the last few days. i, too, like millions before me, will be journeying to jerusalem. i, too, want to add my voice to the din of travelers, craning my neck towards Zion.  i, too, want to lift my head and shout with joy,
"those who trust in the Lord are as secure as Mount Zion!
They will not be defeated, but will endure forever!
Just as the mountains surround and protect Jerusalem,
so the Lord surrounds and protects his people, both now and forever!"
(psalm 125:1-2)
i, too, want to feel the dirt under my feet, the expanse of the sky overhead, and the company of all those who have gone before me.  i, too, want to feel the cold grit of stone that others, maybe even the Annointed One himself, have touched.  i, too, want to ascend the steps, not just to the temple, but to the One who created heavcn and earth, who chose to share story with the ancient people of this land.  i want to rise up, to lift my eyes, to ascend towards the One made a stunning covenant with the people who lived in these lands.  i want to sing, to chant, to play, to touch, to remember, to learn, to reconnect, to see, and to worship the God of Israel, the God of my journey, the God of my only hope.
i am a pilgrim.
i hope to be able to share some of my pilgrimage here in this digital space, with you, if you'd like to read it.  check back in during the week and i should have some pictures and descriptions of what we're seeing, as well as some reflections on what i am feeling.  i hope you will journey with me, even if only through word and image.
and so, as i prepare to fly towards all of this, i share this poem which i have written, a kind of paraphrase of psalm 122, a song of ascent.
i was excited when this trip was an idea,
but now it is a reality!
soon i will be inside your gates, O Jerusalem,
feeling the fabric of your faces and faiths,
at home
in the house of God.
many before me have journeyed here,
pilgrims who have worshipped and prayed,
knelt and wept,
and danced for Almighty God.
i join them, now,
a traveling party of  saints and sinners,
kings and commoners,
and carpenters.
i join a long line of lovers, of believers,
even one who told us that he gave us peace,
not the peace of treaties and decrees,
but a peace that goes beyond our understanding:
a peace i know now,
as i make my way towards your ancient-and open-doors,
o jerusalem.