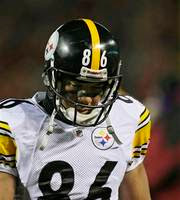 see the look on hines' face there?  that's the same kind of look i see when i look in the mirror.  i actually saw it in the rearview mirror of my car today.  i was looking at my son in his seat in the back.  i had just told him that the steelers lost last night.  he got pretty quiet and said simply, "i'm sad."

that's when i saw my face in the mirror.  it looked less than convinced.  so i continued to reason, hoping to talk myself into it.  "hey, we were champions of the world last year, so we are so lucky that we can still remember that, even if they didn't do well this year.  and we'll be happy for another team who will get to be champions this year (unless its the bengals, ravens, patriots, or cowboys).  that's called good sportsmanship."

checking the mirror, i could see that i still wasn't convinced.

hey, what can i say?  i'm trying here.  the problem is that it's still too fresh.  over the last month or so i've seen my team go from 6-2 at the halfway point, to 6-7, losing to some real REAL bad teams along the way.

so forgive me if i'm hurting a bit today.  i know it's just football, but for better or for worse, my emotions are tied into it.

i'm just trying to remember the unalterable truth: we have 6 superbowl rings, and are the single most successful franchise in the superbowl era.  i can certainly celebrate that, even in the midst of this terrible collapse.

oh, and one more thing.  just because i am annoyed/frustrated/depressed/angry/despondent doesn't mean that i am not a loyal fan.  i am no bandwagon fan, people!  if the steelers didn't make the playoffs for a decade or more, they would still be my favorite team and my passion.  they will always be my favorite team.  this kind of loyalty is exactly what gives me the right to be upset when they lay a whole season of a turd like this.

for now, i'm counting down the days until the april draft.