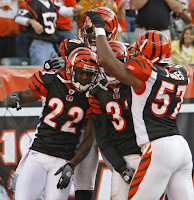 it's pretty much unbearable for me to post this picture on my blog, but i feel like i have to.  yes, the bungles beat the steelers yesterday in another game that the steelers had a nice lead and then decided to lay a big turd on.  blech.  i hope the steelers wake up.  it seems as if they're good enough to be winning these games (although the defense looked pretty week yesterday), but just don't have what's needed to finish.  what is missing?  fire?  skill?  fundamentals?  coaching?  execution?  speed?  i don't have the answer.  but i hope that the steelers are putting pictures like this all over the locker room to inspire them to work harder so it doesn't happen again.

my steelers haven't lost two games in a row in quite some time, so it gives me an opportunity to reflect on the fact that i am no fair-weather fan.  no bandwagon jumping here.  i love the pittsburgh steelers, as you know by now, and i will be continue to be a fanatic about them regardless of the results of these games.

that being said, if you were to visit the steelers blogs that i frequent, you would decide that chicken little is most definately a steelers fan.  "the sky is falling!" is the general refrain all across steeler nation this morning, but i just want to say that the sky has not fallen, nor will it be falling any time soon.  the steelers lost two games that they should have won (sorry, vollers).  does it mean that they stink?  nope.  does it mean that the season is over?  nope.  it simply means that they are 1-2 and have their work cut out for them, particularly with san diego looming on the horizon.

on a brighter note, the yankees are back in the playoffs after a year off, and, in fact, clinched their division by sweeping their arch-rivals, the boston red sox this weekend.  so we will end with a picture of that, just to try and get the week off to a better start. 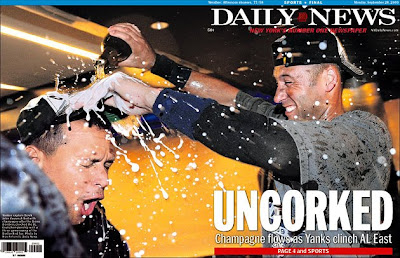 Randy said…
Well Greg It was a long time coming but it was bound to happen! The way you felt when your team was playing good during the first half, and the way they finished, like a different team, just blows you away. This is how I've felt for years. I was proud to see the Bengals(you had a typo, you wrote Bungals) beat the Stallers, or is it Stinkers.... either way...it's black and orange in the jungle!!
10:24 PM

greg milinovich said…
i hear ya, bro. and i humbly take my lumps. steelers lost. bungles won. blah blah blah. i'm happy for you and all the miserable bungle fans, but i am confident it will be a different story when they come visit us in the burgh. looks the division could be pretty dang good this year.
8:00 AM