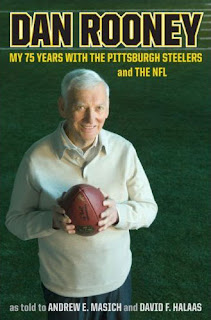 ah, monday morning.  that most unfortunate morning.  the one everyone loves to hate (except on holidays, like today!).  but today marks a special monday on the calendar.  today is the last monday for a long time without football.  man, it feels good to type that.
on thursday night, four days from now!, large men in pads will kick a ball into the air, starting a string of some 256 games.  i, for one, am ridiculously excited.  every year at this time i feel like the isrealites, having wandered in the desert for 40 years (the off-season) and just on the brink of entering the promised land.  say it with me: four more days...four more days!
to celebrate, i ceremoniously hung my steelers banner in the front yard yesterday (incidently, yesterday was the last sunday without pro football for awhile).  i did this last year, too, and the boys from pittsburgh took notice and brought home a sixth (SIXTH!) lombardi trophy, so, i thought i'd do it again.
with all this pent-up anticipation, i finished dan rooney's book last night, "My 75 Years with the Pittsburgh Steelers and the NFL."  what a great book.  probably most non-steeler fans wouldn't be able to hack it, but it really does a good job of providing a quick history of the national football league from an insider's view, as dan rooney has really been involved in the inner workings of the league for a long time.  now the united state's ambassador to ireland, rooney is only involved from a distance, but his legacy lives on as his family continues to run the front office of the steeler organization, following in his footsteps and sticking to his ideals.  and boy does he have ideals.  if i loved the steelers before i read the book, i love them even more afterwards.  it is abundantly clear to me that one of the reasons that the steelers have been so successful is the integrity of those leading the organization.  they put people first, treating them with dignity and respect.  they have shunned a more corporate approach in favor of keeping the organization more like a family.  this means they have to make tough decisions from time to time, but their commitment to honesty and integrity has led to a culture of respect and love between players and the front office, something that is highly unusual in today's nfl.  there have been, of course, many other reasons for the steelers' success, including talent and luck, coaching and drafting, and so on, but it all starts with the quality of leadership, and the rooneys have been the best at that.
i met dan rooney once.  i was at training camp in latrobe.  with my binoculars, i could see that off in the distance, sitting outside one of the st. vincent buildings was coach cowher, and, being young and brash, i thought i would run over and get his autograph.  i didn't want to miss my chance, so i didnt' meander over there - i sprinted.  by the time i arrived at the steps of the building, i was quite winded.  as i asked coach cowher for his autograph (which he gave me, by the way), i finally noticed who he was talking to: dan rooney, the owner of the steelers.  so here i am in front of these two men that i admire, and i am panting hard from sprinting some 200 yards, and dan rooney looks at me and says, "looks like you need to get into shape, son."  i knew right then that my chance of being a walk-on wide receiver for the pittsburgh took a serious hit.  still, i haven't given up hope.  anyway, i don't remember what i said to mr. rooney.  i was too embarassed.  but if i could see him  now.  if i could have a conversation with him in which i wasn't breathing like i just tried to beat stefan logan in a race, i would simply shake his hand and say, "thanks.  thank you for your integrity and your example and your commitment to loving people over and above your commitment to try and make a buck.  thank you for fiercely protecting this team and holding it to high standards.  thank you, mr. rooney, for being an inspiration and a role model when both of those are in short supply.  oh, and if you ever need an extra reciever to run routes, here's my number..."
are you ready for some football?