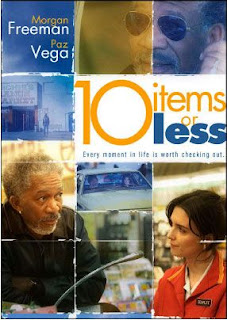 i watched a really good film on wednesday night called 10 items or less,, and thought i would just mention it here at agent orange records. it’s a simple story that seems to have flown under the radar a bit, even though it stars the always awesome morgan freeman. the film tells the story of an aging actor who hasn’t worked in 4 years, largely out of a fear of committing to a project that will fail. the story begins with this actor (freeman) doing research for a potential role as a store manager in a nice safe independent film (if it fails, its no big deal), by finding a small grocery somewhere in los angeles and watching what happens. the narrative takes an interesting turn when he meets a young sassy cashier who catches his attention. a series of events results in them spending the day together, and the meat of the film is in their interaction during this day spent together. two very different individuals from very different backgrounds find some common ground and some real encouragement from one another. it’s a great story that reminds us of the importance of each person in our lives: the guys at the car wash, the other customers in a store, and the cashier at the grocery store. Not that we always have something to give them, but perhaps that we have something to learn from them. the tag line for the film is "you are who you meet," which is a way of saying that we can discover ourselves - our true selves - in one another if we'll take the time to talk and listen to one another despite our differences.  do we do this?  do we listen to each other?  do we even see one another?  or do we rush by, content to compartmentalize people based on snap judgments and utility (is someone useful for me)?  10 items or less reminds us that it is critical to our own well-being to truly be present to others.
(note: if you are thinking about watching this film based on my review, just realize that it is rated r for some rough language, and if that kind of thing bothers you, you probably won’t enjoy this film. Just saying.)
(note: special thanks to my friend for recommending this film to me. same guy who took this picture.)