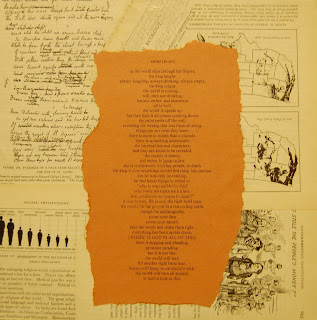 here in esther 7 we finally get back to the little banquet (actually the second one) that esther is throwing for the king and for haman, to try and ask this little favor that he not destroy all the jews.  she plays her cards right and things don't look too good for haman.  it looks even worse when the king comes into the room a bit later and it looks like haman is taking advantage of the queen.  how to punish haman?  ahh, yes...he had been building a gallows for mordecai...that will be perfect.  things have taken quite a turn, haven't they?  maybe even upside down.  oh, and by the way, still no mention of God.  where is God in all of this?
you can read the chapter here. 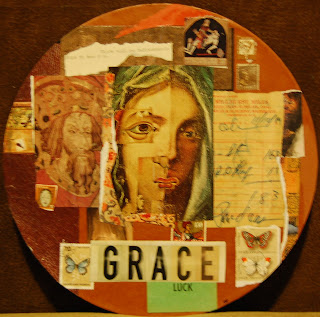 esther 7
paper collage on vinyl lp; paper collage on album cover
gregory a. milinovich
esther (seven)
as the world slips through his fingers,
the king laughs.
always laughing, always drinking, always empty,
the king reigns.
the world is turning...
still, they are drinking,
haman, esther, and ahasuerus
all is well.
the world is upside up.
but then it all comes crashing down.
the paint peels off the wall,
revealing the writing that was there all along.
things are not what they seem.
there is more to masks than a charade.
there is something underneath.
the carnival has real characters,
and they are about to be revealed.
the curtain is drawn,
and esther is (gasp) a jew.
she is condemned, with her people, to death.
the king's own mouth has moved this thing into motion.
but he was only just talking,
he had better things to attend to.
"who is responsible for this?
who made me make such a law,
that condemns my queen to death?"
it was haman, the proud, the right hand man.
the masks hit the ground in a resounding crash.
change the unchangeable.
cover your face
cover your mouth.
take the words and make them right.
everything has been upside down.
(WHERE IS GOD IN ALL OF THIS?)
there is begging and pleading.
prostrate pleading.
but it is too late.
the world will wait
for another right hand man.
haman will hang on mordecai's stick.
the world will turn all around,
at such a time as this.

Greg C. said…
I gotta say, for what it's worth, I'm very impressed by your study of Esther. It's like reading a story I'd never read or heard before! Not to mention all the work you put into it. (From the get-go I liked the idea of using lp records as your canvas.) And today's collage is my favorite. Way to use God's gifts!
3:18 PM

greg milinovich said…
hey greg - thanks, man. it's nice to know you're reading and are interested. when i do stuff like this, my readership drops way off, and people rarely comment, so, thanks for hanging in there! i appreciate the affirmation. peace.
7:25 AM