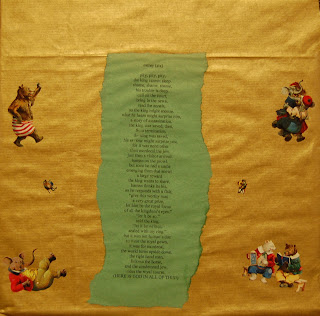 in esther 6 the tables begin to turn a bit (and the upside down world starts to rotate).  in a fit of insomnia, the king has someone read to him the royal records, in hopes that it will help him doze off.  as he listens, he hears the story of mordecai discovering the plot to asassinate him.  when he finds out that mordecai has not been properly thanked for this, he asks haman what should be done to honor a loyal subject.  haman doesn't realize the king is talking about mordecai.  he thinks the king wants to honor him.  so he envisions a royal procession through the kingdom.  the king thinks its a brilliant idea, and commands haman to make it so for mordecai, the jew.  and poor haman has to make it happen.  you can read the real version here. 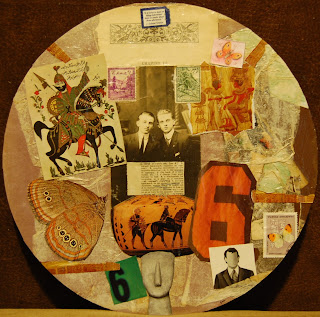 "esther 6"
paper collage on vinyl lp; paper collage on album cover
gregory a. milinovich
esther (six)
pity, pity, pity,
the king cannot sleep.
shame, shame, shame,
his trouble is deep.
call on the court,
bring in the news,
read the annals,
so the king might snooze.
what he hears might surprise him,
a story of assassination.
the king was saved, then,
from termination.
the king was saved,
his saviour might surprise you,
for it was none other
than mordecai the jew.
just then a visitor arrived.
haman on the prowl.
but soon he had a smile
emerging from that scowl.
a large reward
the king wants to share,
haman thinks it's his,
so he responds with a flair,
"give this worthy man
a very gret prize,
let him be the royal focus
of all the kingdom's eyes."
"let it be so,'
said the king,
"let it be written,
sealed with my ring."
but it was not haman's due
to wear the royal gown,
it was for mordecai,
the world turns upside down.
the right hand man,
follows the horse,
and the condemned jew,
rides the royal course.
(HERE IS GOD IN ALL OF THIS)