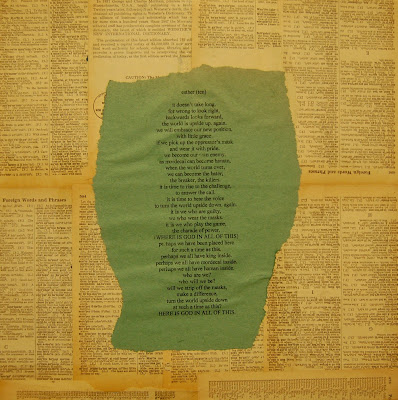 in what seems like an afterward, added later by an editor to put a nice bow on the story, chapter 10 of esther is a mere 3 verses long.  all we learn is that the king imposed a tribute; that all his good works are recorded in the annals; and that mordecai rose to second in charge, held in high esteem by the jews.  as is typical of women characters in the bible, esther isn't' even given the dignity of an end to her story.  we have no idea what happened to her.  we only know that because of her courage, mordecai rose from sackcloth and ashes to glory.  in that sense, it is a redemption story.  but a messy one, to be sure.
i hope that at least some of you have enjoyed this lengthy jaunt through what seems to be a both familiar and yet completely unfamiliar little story in our scriptures.  i (mostly) tried to avoid moralizing and sermonizing here, although it creeped in from time to time.  instead, my goals were to (1) show the freedom we have as we engage and interpret scripture to re-imagine and retell it.  esther is an ancient story now preserved on tissue-paper-thin pages of bibles around the world.  in fact, our bibles are full of these stories.  and we often only engage them as dusty old worn out antiquity.  however, if we give ourselves permission, and offer our time and energy and creativity, we can find new life in the ancient words.  we read in the bible that all scripture is God's breath, and i think that part of interpreting the bible is breathing along with God.  getting in tune with God's breath.  listening to its rhythm and pace.  feeling its warmth on your face.  for me, that involved gluing pits of paper to old ray conniff albums and writing free-form poetry that captured my response to the story.  i don't know what it would look like for you, but don't be lulled into thinking that the bible is boring!  here is the truth: while it may at times be difficult to understand, it is so often anything but boring.  it is full of action and adventure, blood and guts, sex and lies and revenge.  and somewhere in the midst of all of it, we find God, who still turns stories of brokenness into stories of redemption.
also, i (2) wanted to highlight the carnivalesque in the book of esther.  most people wouldn't immediately think of this upon reading the 10-chapter book, but i rely heavily here on a book by Kenneth Craig called Reading Esther: A Case for the Literary Carnivalesque which presents a great case for how the book of esther is a particular kind of literature aimed at challenging people of power by making a farce of it.  the jews, you should remember, were in a period of awful exile, having lost their homes, their families (in some cases), their cultural identity, their language, their religious practices, etc.  they were a hurting people.  so, in that context, this book tells a story which, as far as recorded history is concerned, never seemed to really happen, in order to challenge the existing power structures (the persian government) and turn it upside down (even if in a farcical, court-jesterish kind of way).  it is a fascinating way to read the book, and you'll see evidence of it in the collages i made and the poetry i wrote.  in the end, the challenge for me is to be willing to use the platforms i've been given to challenge injustice (even if it's scary), and to be careful not to embrace the same corrupted/corrupting power that i have challenged.  it is an ongoing journey, the dangers of which are expertly and captivatingly exposed in the book of esther.
again, i hoped you enjoyed this experiment.  if not, sorry.  good news for you: its over now.  tomorrow i will announce the winner of the sunburst collage.  you can still get in the drawing before midnight today (saturday).  just go here and comment about what you would want 40,000 of.  have a great weekend, and remember that you might just be called to be where you are...for such a time as this.  peace. 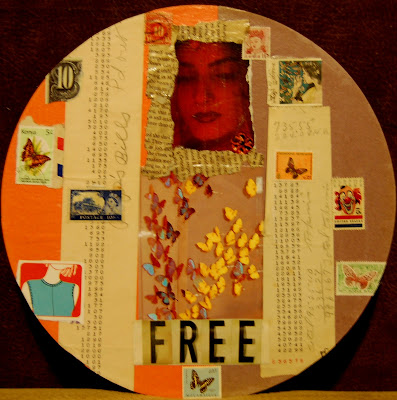 esther 10
paper collage on vinyl lp; paper collage on album cover
gregory a. milinovich
esther (ten)
it doesn't take long.
for long to look right.
backwards looks forward,
the world is upside up.  again.
we will embrace our new position,
with little grace.
if we pick up the oppressor's mask
and wear it with pride.
we become our own enemy.
as mordecai can become haman,
when the world turns over,
we can become the hater,
the breaker, the killers.
it is time to rise to the challenge,
to answer the call.
it is time to hear the voice
to turn the world upside down. again.
it is we who are guilty,
we who wear the masks.
it is we who play the game,
the charade of power.
(WHERE IS GOD IN ALL OF THIS?)
perhaps we have been placed here
for such a time as this.
perhaps we all have king inside.
perhaps we all have mordecai inside.
perhaps we all have haman inside.
who are we?
who will we be?
will we strip off the masks,
make a difference,
turn the world upside down
at such a time as this?
HERE IS GOD IN ALL OF THIS.