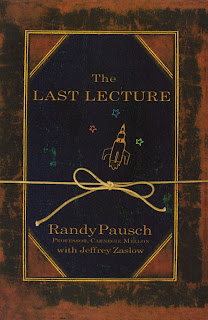 last week while i was down the shore at a conference committing all kinds of headdesks, i found some time at night to read a book that's been in my queue for awhile.  it's just a little book called "The Last Lecture" by a guy named randy pausch.  the premise of the book is that pausch, a professor at carnegie mellon university in pittsburgh, was diagnosed with pancreatic cancer and given just a few months to live.  he responded to this challenge with charisma and grace, even preparing a final lecture as a way to leave some of what he learned in his life.  that final lecture is actually on you tube and you can watch it in its entirety, if you'd like.  the book, though, is basically just an expanded version of the lecture, and was a fascinating read.

pausch is a really neat man, who had the courage to keep dreaming big, even after he became an adult, and the persistence to follow these dreams even in the face of obstacles.  along the way he has acquired a large collection of clichés that have helped him put into words his pretty cool life.  while sometimes the clichés are too trite for my taste, his irrepressible courage in the face of cancer, and his commitment to following his dreams is absolutely inspiring.  further, pausch is a husband and a father, and the book absolutely deals with his journey of figuring out how to be present to his family while at the same time preparing to leave them.  these parts of the book were equally fascinating and terribly difficult for me to read.  there is no question that his determination and courage are incredibly inspirational (inspirational in the literal sense: making one full of spirit, or Spirit).

the book reads a bit like a collection of public speaking clichés, so i won't recommend it as a great literary achievement.  but i will recommend it as an incredibly honest account of one man's journey of a diagnosis of cancer and impending death, his struggle to remain a present husband and father in the midst of the journey, and his quest to share his hope and dreams with the world.