April 08, 2008
as many of you from reading last week, i am elated about baseball season finally being here. the yankees have made it tough on me this week, struggling against some good pitching by toronto, and then looking outmatched for the first two games against tampa bay, but they have won two in a row now and are in kansas city now for a series there starting this afternoon. being back in baseball land, so to speak, has sparked in me an unquenchable fire to go see the yankees this year at the stadium in the bronx, the last year they will play at this stadium where they have played since 1923.

so i got online to look for some tickets. the only problem? everyone else in the country has apparantly had the same idea, and tickets are pretty hard to come by, especially on a reasonable budget. i mean, if i had $1200 to spend, i could have picked up a couple of average seats. but alas, i don't have that kind of bank. but i did find some coupon codes online and was able to get these seats at stubhub. 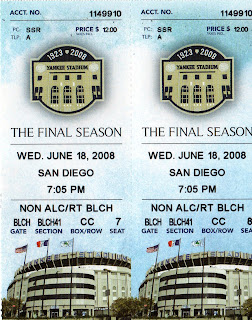 and so i am the proud owner of these new york yankee tickets. now, they aren't the greatest seats in the house, i can assure you, but they aren't awful either. they are in right field in section 41. those are the bleachers there, which means you don't get any back to your seat, and you can't get any alcohol, which is not a problem. you also can't walk around to the rest of the stadium, which also isn't a problem because there's just not much to see at the old stadium. i guess they aren't the ideal seats i would love to have, but the good news is that they are in the third row from the field, so we will feel fairly close, and we could always have a home run come our way. 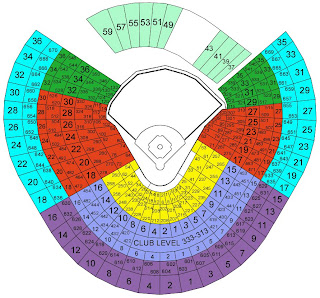 if you look at this picture of the stadium (below) and you find the black seats in centerfield and then look just to the right of those, you will see where we will be sitting on wednesday, june 18th, watching the yankees play the san diego padres. as you can tell, i am like little-kid-level excited about this, because i love going to baseball games and just don't get too very often. i'm the kind of person who dreams about having season tickets when i retire, so i can go to lots of games. so this really has me all hopped up on baseball adrenaline and looking forward to june 18th. in the meantime, i want to see a game in pittsburgh because they had their home opener in beautiful pnc park yesterday and everytime the camera showed the stands they were no more than half-full. very disappointing. 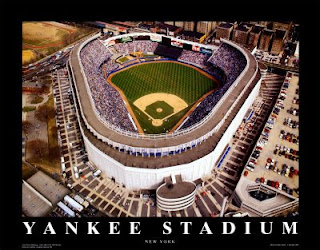 ahhhh, baseball. sooth my spring-longing soul. lead me not into impatience, but deliver me into june 18th.

you let me know when and how many and I might be able to "hook us up"!