April 02, 2008
so last night the yankee season began. it was the final home opener in this version of yankee stadium, which has been open since 1976, which is really just a revision of the old one, which opened in 1923. next year they will play at the new yankee stadium which is being built across the street.

yankee stadium is incredible. i mean, as far as stadiums go on their own, it isn't that great. it is clearly a product of the 1970's. it is uncomfortable for watching a game, and there are quite a few areas that have obstructed views. but it is incredible for another reason: the same mystique i talked about yesterday. how many greats have played there? ruth, gehrig, dimaggio, berra, whitey, mantle, rizzuto, howard, munson, and reggie just to name a few! the place really does feel like a bit of a hall of fame where the greats actually played.

and so there will be a bunch of lasts this season for the yankees. this was the last home opener at this stadium. 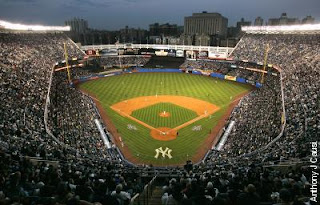 and they won it! they wouldn't have without melky cabrera's home run and two stunning defensive plays, particularly this one. now, i know most of you are going to laugh at me, but i want you to know how much i love baseball, and this little vignette will illustrate quite well: 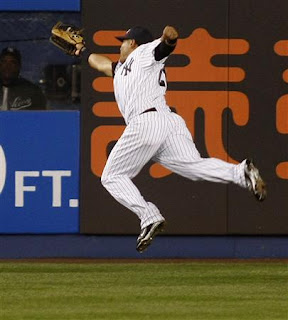 i had a meeting last night so i couldn't see the game. but, i recorded it on vhs (we have no tivo) so that i could watch it when i got home. so sometime around 10:15 i got into bed and started watching the game (including all of the pre-game introductions and such). shannon was lying next to me and fell asleep, and i didn't want to bother her, but i really wanted to hear what michael kay and paul o'neill were saying as commentators, so i moved from the bed to a not-so-comfortable seat on the floor directly in front of the tv. i felt like a kid watching tv late at night. i think it was the top of the 4th inning when melky made the first of his beautiful catches in centerfield. i loved it. i rewound it and watched it again. then he did it again with this catch that you see pictured above. (now here comes the part where you are going to make fun of me) i began to cry. not a sob or a weep, but a moved-to-tears kind of wet eyes cry. i got emotional about some sweet defense in a baseball game. so bring on the mockery. i can take it.

and so i lied in bed after mariano wrapped it up with a save, and i couldn't sleep. i was thinking about the next 161 games. about all that might happen in those games. all the defense. all the streaks and slumps. all the bad weather. all the bad tempers. all the unbelievable comebacks and horrible collapses. all the errors and all the beauty and grace. it is going to be an awesome season.

and i finally fell asleep dreaming that i was centerfielder in yankee stadium, sprinting to my right, leaving my feet, diving for the ball...

Anonymous said…
I always pictured you more of a catcher type. You just don't have the look of a Yankee Center fielder.

When you got the scruffy look going you remind me of Thurman Munson!
9:33 AM

greg milinovich said…
i'll take that as a compliment, man! he was awesome.

when i used to be skinnier (before seminary, i think), people used to say i looked a bit like jeter. just wish i could play like him...
9:50 AM