i am america (and so can you) 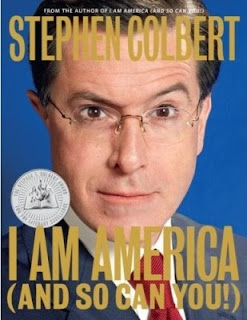 i have to admit that i have been a bit of a stephen colbert fan ever since i used to watch him do the most insanely hilarious interviews on the daily show many years ago. once he got his own show i didn't really follow him all that closely, but since his book came out i've been wanting to read it. and so i borrowed a copy (something he explicitly demands his readers NOT do - he shamelessly and hilariously pleads for people to buy, not borrow), and i read it in a couple of days.

one of the nights i was reading it, i was sitting up in bed, and shannon was already asleep next to me. until the quake hit. not an earthquake, but a fit of unsuccessfully restrained laughter that resulted in my body shaking - no, convulsing - and the bed following suit. my sleeping wife was irritated. i was entertained and amused. but that's about the end of it.

and that's my basic review of the book: its funny. but i don't think its particularly poignant in terms of accomplishing anything. for those who don't know, colbert is a satirist. he is a character, peddling basically right wing conservative republican views in a (relentlessly) tongue-in-cheek way. he takes what is assumed to be a basic belief of a conservative american and he then stretches it to its most ridiculous conclusions in a way that is undeniably funny, even if you are (wittingly or not) the butt of his joke.

there really is no denying his sense of humor. he has a knack for evoking laughter. but is that all? might there be more noble purposes for satire? as i read the book (and don't get me wrong - i thoroughly enjoyed the sucker), i couldn't help but think that he is only a mocker; that nothing constructive is happening here. and maybe that's ok. and maybe its not. i'm not sure.

but i would recommend this book to those who would like to laugh, and even to those who are right wing conservative republicans, because there just might be some truth in some of this satire that might do something more than entertain. maybe.

as a final note, i find it interesting that the liberals are satirizing the conservatives. but the conservatives? i don't see the satire. i only see angry, almost militant, tv and radio talk show hosts who spew hate and fear from the powerful positions. clearly this isn't an official strategy on either side, but i find the different political tactics interesting, and even telling.

Crafty P said…
i think I love stephen colbert, too. actually, I know i do, but you asked what do i was just restating the question in my answer.

i added him on fb. you can too!

i would very much like to read that book... as i am a lover of laughter and need as much laughter as i can get to survive! ha!

ps been introducing the little people to rich mullins lately. i can't believe it's taken me so long! we also just did an introduction to the beatles.
11:00 AM

Anonymous said…
first of all, i love steven colbert. rachel and i watch obsessively. i find it interesting how liberals characterize we conservative republicans as filled with hatred and spewing forth. i think both sides share equally in that sad sport. but like true liberals, always pointing out the splinter without regard for the log. i know this for a fact because frank is a true east coast italian catholic liberal, whatever that means, and one of his true joys in life is to enflame my white trash, constitutional passions with his sadly misguided views on all things public. we really enjoy going a few rounds on the issues of the day. it adds spice to our life (it's very sexy to argue about politics) even if it confuses rachel. i know she wants to be a liberal like her dad, but she feels sorry for me sometimes. oh how i long to be safely back in buckeye land where everything is so nicely black and white. like all true conservative republicans, all i want to do is be barefoot in the yard with a baby on my hip, a 1974 dodge up on blocks in the back yard, a six pack of bud in the fridge and a muzzle loader safely in its rack in my hubby's chevy pick-em-up truck. you know, just to ward off the hoards of commie sympathizers who have invaded my beloved country.
Yee-Haw
Juli D
11:58 AM

greg milinovich said…
just for the sake of clarity, what i am saying in terms of the difference between liberals and conservatives IN THIS CONTEXT, is that i see satire coming from the left (colbert, stewart) and fear and loathing coming from the right (limbaugh, o'reilly). i'm not saying ALL liberals are one way or all conservatives are one way. i'm simply reflecting on what i see in the media, and that i find it interesting.
2:35 PM

Anonymous said…
You just proved one of my many points about liberals - and I'm not afraid to say ALL liberals. You have no sense of humor.
JuliD
7:08 PM

greg milinovich said…
juli juli juli. i thought your post was hilarious. i just didn't want you thinking that i was stereotyping anyone. you always make me laugh, you know...

anyway, thanks for posting. i hadn't heard from you in awhile and wondered where you'd gone...

Joel said…
im a big cobert fan too. he is great to watch after a hard day, so biting so witty. he is a praticing catholic, by the way, and i really think some of his satire is to point out the disparity between our beliefs and our actions. i know some of his jokes are just for laughs, no point to them, but i do think he may have a message to get out there too.
monica
2:22 AM

Anonymous said…
Greg, don't ever be afraid to stereotype anyone (well, you might want to wait until you've received your full annointing in May to avoid any unpleasantness with the PC UMC mucky mucks) - stereotypes are stereotypes for a reason - they have the ring of truth! Anyway, you can take it from me - you are a liberal and you should be proud!! Not because you are a liberal, of course, but you should be proud anyway!!

I love your blogs, but I've been in Washington DC where life is strange and surreal and you should be very afraid based on what goes on down there. Anyway, I've had the joy this week of working with a group called Enough Is Enough and they are fighting internet pornography and slave traffic in the US. Very awesome programs for parents, teens, youth groups and PTAs, etc. Yesterday we prayed that internet predators would be gone by the time your precious ones have their first facebook. Amen.
Anyway, I'm back - love your blogs and you know I'm always willing to reveal my stupidity and anything else!!
Hope to see you Sunday
JuliD
8:32 AM