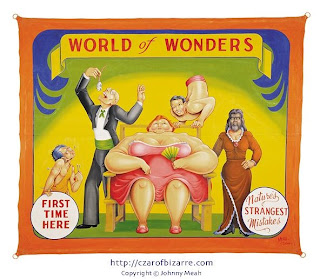 i am 32 years old. and i am soon to be ordained as an elder in the united methodist church.
now that might not seem like a big deal to many of you, but in some circles it makes me a bit of an anamoly, or worse, a circus freak.
i don't know what the most recent figures are, but a quick look at the research done here will show you that in 2005 the united methodist church had about 18,141 elders around the globe. of those, only 850 were under the age of 35. 850! that is less than 5%. in 1985 it was about 15%, so you can see the fairly rapid decline in young clergy.
now all of this puts me in a position that feels very strange to me. when i am in the local church doing ministry and living out my call, i never even think about it, and my age is very rarely an issue. but when i am in united methodist circles, like district/conference events, i suddenly feel like i am a caged freak, for people to poke and prod and say things about like: "how did we get him at such a young age?" and "where can we get more?" i have been at several gatherings where elders under the age of 40 were asked to raise our hands (usually to make some kind of point) and only a few of us sat there with hands raised.
i don't feel like the church is dying. i think many churches are dying, but not the global umc. there are many young people who are involved in ministry at various levels of the denomination, but who are (understandably) hesitant or resistant to getting involved in the (nearly eternal) ordination process. i think we must change something this year at annual conference to make it somewhat more attractive for young people to engage in this process.
i hope that by the time i'm 50, i'll still be a minority because we will have a church full of young, enthusiastic emerging elders. plus, by then i'll look even more like a bearded lady, so i will have grown into my role.
until then, church, know that there are a few of us out here, and we love this church and we want to see it succeed and be a vibrant spiritual force in a postmodern world. but you'll have to let us do it. don't just stare and point. start talking to us and listening to us. start surrendering your death-grip on the status quo, and start moving into riskier places. that's where we need to go.