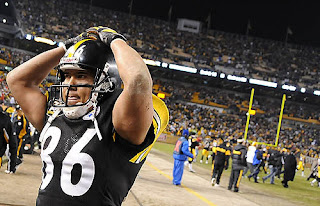 yeah. so i'm sure many of you either watched the game on saturday night or at least heard the score. and i'm sure that as you've checked the blog over the last few days you've expected to read words of pain, but have found not even a mention of the crushing defeat. there's a reason for this: denial. i just turned off the tv saturday night and haven't really thought much about it sense.

but in the back of my mind i've known that i'm going to need to do this. so here goes.

somehow i feel like i am one of them. i don't say that "they" lost on saturday night. i say that "we" lost. i am one of them. no, i may not be on the field, but i would be if i could. as it is i practically jump through the tv trying to make tackles for the defense, reads for the offense and special teams plays. oh, special teams plays. don't even get me started on that.

i get way too into these things. i watch film just the way the players do. i have taped steelers games from way back, and during the week leading up to the games i watch old games against the same opponents, studying how they do things. i watch key players and see how they are successful. i imagine that i am in team meetings with the steelers and i am offering my opinions about how we might be able to defend against their strengths and attack their weaknesses. to put it in a nutshell: for better or for worse, i am invested in this team.

that being said, nights like saturday are difficult for me. to be honest, i had low expectations. the steelers have been so injured (willie parker, roethlisberger, marvel smith, max starks, aaron smith, troy polamalu, ryan clark, alan rossum, and so on and so on) and they have played such mediocre football over the last several weeks that i just didn't have high expectations about this game, especially with jacksonville coming in so hot. and so when the jaguars dominated in the first half, i wasn't really surprised. i was watching what i was afraid i was going to have to watch: a good team riding a hot streak beating up on a good but injured, tired and broken team.

with the lead with 4 minutes to go, the steelers began to play 'not to lose' instead of playing to win. they got conservative. they abandoned the attacking style of offense that had allowed them to dominate the second half. they tried to run out the clock. and they made a really awful play call in the process (a quarterback keeper on third and 5 deep in your own territory? are you freaking kidding me?). then they punted. then the inevitable began to unfold. a missed call by the refs, a hole you could drive a truck through, and a 4th-and 2 quarterback run that sealed the deal. game over. burning flame of hope doused. childlike heart of joy and wonder crushed by the bludgeoning blow of defeat. 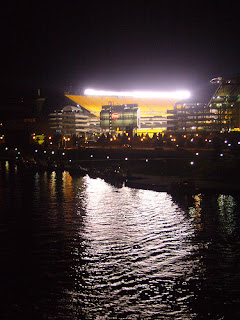 would someone please hit the lights on your way out?

see you next year.

Erin said…
I'm with ya, Greg. Wasn't expecting them to win, but oh, so tragic how it ended.
So, now that that's over, are you in for a Patriots vs. Packers Superbowl? I want Bret to win one more...
12:23 PM

Anonymous said…
"Ouch" pretty much says it. I feel your pain man, I watched the entire game and was hoping they would do it.
But alas..... if you need a shoulder to cry on, come see me.
Peace
4:12 PM

I feel your pain. I am a lot like what you described about Georgia Football, except I haven't crossed over to watching previous games to see where their weakness/strengths are...thats intense. Imagining that you are in the locker room with them? Okay maybe Ive done that a time or two, but yeah it stinks when the season comes down to that. Even worse when your team is on fire, but couldn't get into the SEC championship game( such as GA- Im pretty confident we would have taken care of LSU, then we would have been the ones to demolish Ohio State.) So this would be considered fantasy..what would have been. Yes I feel your pain. Ben Ro looked rough, making bad decisions. I was thinking of you at the end of the game, and even bet my wife that you would blog within 12 hours. There is always next year...Keep your head up, at least your team isn't the Falcons.
4:39 PM

greg milinovich said…
erin - actually, i'd like the pats to lose as soon as possible. i'm a jags fan for the rest of the playoffs, because the more they win the better the steelers look.

billy - i'd love to see you! i'm coming down the parkway a bit tomorrow - around oakhurst - are you available at all? call me...

Megan said…
I was about to respond to erin's comment that I was rooting for Jacksonville and hoping the Pat's lost ASAP but you beat me to it Greg. My brother up in Boston said that as sad as he was to have the Steeler's lose it would have been harder for him to be in Boston and endure the Pat's beating the Steelers again (which, given all the injuries, would have been likely).
5:39 PM