January 22, 2008
it occurred to me yesterday that i never posted any pictures or blogged at all about our christmas. quite frankly, it is overwhelming to me when we have so many pictures and so many experiences in a short time, but now that we are nearly a month away (already!) from it, i thought i would share a few pictures. 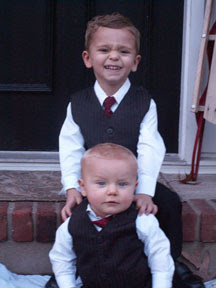 these pictures were taken early in the day on christmas eve by shannon on our front step. i love these pictures! we have several more, too. they just look so adorable to me in their little vests adn ties. christmas eve was a long day for us as our church has 4 christmas eve services! i was able to miss one of them to have a chance to be at home with my family as we did our own christmas traditions (like leaving noodles out for santa). the best parts of christmas eve for me were preaching to a packed house at the 7:00 service and getting to spend some time with my family at home. the worst part? losing my voice during the course of the 11:00 service (i didn't really get it fully back for several days). 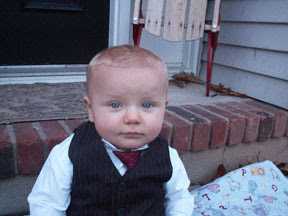 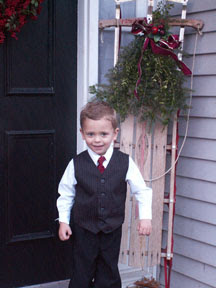 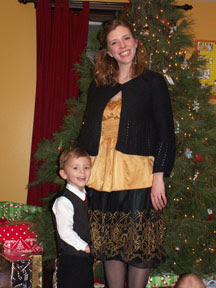 christmas morning was fun. we woke the boys up, and although jack was still pretty groggy, he was excited. after going to the potty he came downstairs (all of this is videotaped, by the way), and began looking around. paying no attention to his presents on the hearth, he asked, "where is he?" we answered, "well, santa's not here, jack. he had to go to lots of other houses and leave presents there, too. he came here and brought you and cade some presents but he didn't stay here." this was apparently not the news jack wanted to hear, and he began to weep. he was genuinely upset because he had fully expected to come downstairs and find the jolly old saint sitting in our recliner sipping on a cup of hot cocoa with a belly that shook when he laughed like a bowl full of noodles. i dont' know where he got this idea, because we certainly did not intentionally mislead him, but that is what he believed. however, he was soon distracted by the presents that santa had left, so he got over it pretty soon. the next two pictures are the boys with some of their presents. 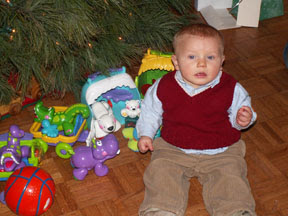 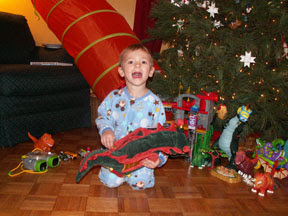 after celebrating our own christmas morning we hopped in the car and drove out to monongehela, pennsylvania to spend a few days with my family. we had a wonderful time out there, and my parents spoiled us AND the boys, as always. below are a couple pictures from our Christmas out there. in the picture of jack you will see his dragon. he got two dragons for Christmas (the other is the puppet on his lap in the above picture) and a dinosaur. he is really into naming things right now, so he named them shotkey, shee-tee, and shekawk. i don't know where these came from, but he still calls them by these names now. 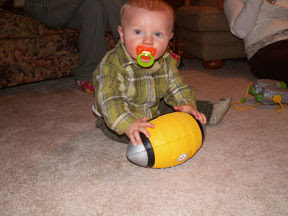 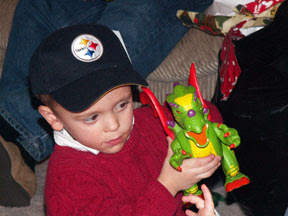 after a few days at my family's place we drove to central pennsylvania for a few days with shannon's family, where we recreated the christmas chaos all over again (only this time with 6 grandchildren). we had a wonderful time there, as well, but by the end of it we all kind of felt like this: 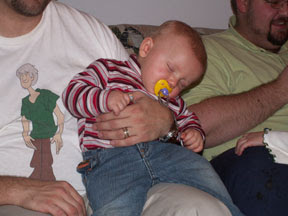 we truly had a wonderful blessed Christmas, mostly because we got to be with our family, celebrate the birth of hope and life, and remember that it is in the context of love that any of it makes any sense at all. you know, its good to stop this week, nearly a month since the christmas frenzy, and reflect enough to remember to bring the joy of Christmas with us into january, into the rest of winter, into the rest of our lives.

Erin said…
greg,
boy, that sounds exhausting. as much as having family nearby can sometimes be annoying, i'm glad we don't do any traveling at Christmas!!
12:15 PM

where did you get that shaggy shirt? my boys are obsessed with scooby-doo.
3:02 PM