leo bebb is teaching me to pray 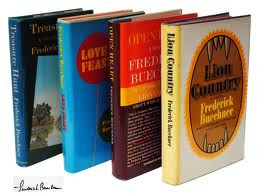 finished.
this morning, just a few minutes after midnight, i finished a very compelling series of books by the man who has not only maintained his post atop by "favorite author of all time" list, but has staked a claim to that spot that will likely keep him there forever: frederick buechner.  the series is comprised of 4 books by the names of "lion country" (which i already wrote about here), "open heart," "love feast" and "treasure hunt," and they are sometimes printed together in one volume entitled "the book of bebb" as you can see below. 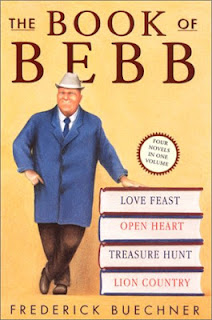 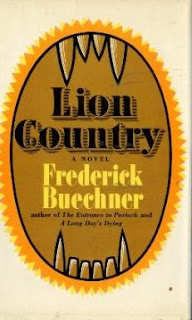 as i mentioned, i already reviewed 'lion country' here on my blog, and in some ways, it was my favorite of the series, at least as a stand-alone book.  as the series goes on and the characters' deeper flaws and failures are revealed, i see more of my own ugliness in them, and maybe it feels a bit too much like a full-length mirror showing all the moles and wrinkles and stretch marks that i'd rather no one ever see, including myself.  and yet ("thank your stars there is always and yet," says gertrude conover, a theosophist character in the series who is either mad as a hatter or faithful as a saint, or perhaps equal parts of both with a bit of senility thrown in for good measure), and yet, there is something about seeing all our failures and foibles just open, like a broken heart, that puts our guard down enough to at least come to a place where we have to make a decision about whether or not we believe we are really worth loving as we really are.  how that conversation of the heart goes is anybody's guess, but, at least for me, these novels were the mirror that reminded me that i am as broken as the best (or worst) of them, and that God's grace is as much for me as it is for leo bebb or antonio parr or luce or gertrude or sharon or even tony, that loose cannon.  the long and short of it, buechner is artfully preaching, is that there isn't a one of us too far from the truth or the light to find a way to come face to face with both that brokenness and the profound faith that there is hope for us yet.

one of the masterful things about the novels is the layers of meaning.  he writes with a profound sense of irony: that what might seem to be about a fat bald man with a closet full of skeletons and a flair for making the gospel dramatic, turns out to actually be about you.  what seems to be one thing is actually another, and if at times this makes the characters seem almost like caricatures, i would argue it is because they are so full of life and reality, more 3-D than the typical characters we encounter in prose, that they seem larger than life.

i had the sense while reading these novels, that i was watching someone sew one of those intricately beautiful tapestries, from the reverse side.  it's all threads and zig-zags this way and that, almost in what appears to be random directions, resulting in chaos.  and yet, i would recognize the threads.  buechner would talk about luce's love of gin and orange juice, and i would recognize that same dark thread from an earlier section, and it would call up all the pain she was trying to stuff down with that cheap gin.  and then he would write about bebb's raincoat, or brownie's teeth, just little details - threads, really - and i would recognize them for their various colors, but it still just looked like a jumbled mess to me.  and then, from time to time, like the weaver slowly wanting to reveal the magic of it all, he would flip the whole thing over and let me see what was being made, and - holy love! - it was stunning.  not because it was like norman rockwell or one of those paintings you see at a bed and breakfast, but because it was so darn real: so much chaos and irony and terrible shame and fear and loneliness, yet woven tegether with an undeniable grace and hope that made the whole thing take your breath away, both in laughter and in - gasp - awe.  half the time i wasn't sure if i should weep or laugh, and mostly i did some of both, which is about as close to actually praying as some of us know how to get.

and that's what leo bebb does, i guess.  for sharon.  for antonio.  for luce.  even, maybe, in the end, for babe and brownie, too, is teaches us that there isn't a place that grace won't go to find us like a lost sheep and pull us back to the fold, regardless of how badly we've messed the whole thing up.  i think, in his own way, kind of like buechner himself, bebb teaches us to pray, to believe, to hold onto hope, and to open our hearts to one another in love, even if it means bearing parts of ourselves we'd rather no one ever see.  it's the gospel, in other words, and it is woven together in what looks like the chaos of real life, only to reveal a pattern on the other side; a pattern of love beyond which we know how to imagine. 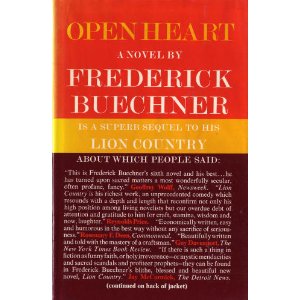 “Frederick Buechner brings the reader to his knees, sometimes in laughter, sometimes in an astonishment very close to prayer, and at the best of times in a combination of both.” – Michael Mewshaw, The New York Times Book Review 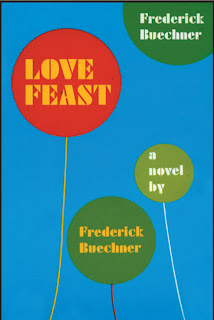 "Buechner, himself a minister, writes about matters theological with a fine satiric touch and a keen appreciation of human foibles. His novels are exceedingly funny, but they are given great depth by Buechner's genuine affection and compassion for his characters. That is especially true of Love Feast, in which Buechner has marvelous fun with Bebb's amiable conniving but in which he also portrays with complexity and feeling the temporarily disintegrated marriage of Bebb's daughter and son-in-law...Life is precisely what Buechner is writing about. Beneath all the antics of Leo Bebb and those around him there is a continuing celebration of life and the interrelation of lives. Buechner's people may at first glance seem caricatures, but their robustness is merely humanity magnified." - Jonathan Yardley, The Washington Post 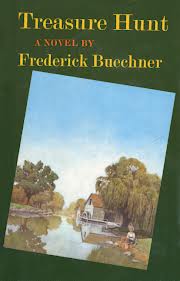 "There must be a lot of Frederick Buechner fans out there who loved reading his wild novels about Leo Bebb, holy con man, devout scalawag, cockalorum, whose antics in the name of the Lord were a stronger affirmation of faith than the platitudes of the pious. Well, there's a new one...They are all wonderfully funny and at the same time deeply reverent...I'll say it again. These are grand books." - Margaret Manning, Boston Globe