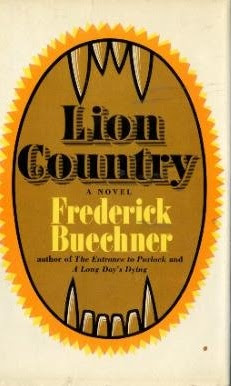 well, after finishing dan brown's '"the lost symbol" last week, i decided i wanted to keep devouring books, so i grabbed a buechner book off the shelf.  i've been meaning to read it for some time (probably like 9 years or so), but for some reason, i never got to it.  actually, it is the first in a series of 4 about a crazy character named Leo Bebb.  The first book is called "Lion Country" written in 1971, and it tells the story of Antonio Parr, a bit of a lost soul trying to make some sense of his mod-podge life.  Responding to an ad in the newspaper promising ordination as a minister of the gospel for a small fee, Antonio gets ordained through the mail by one Bebb.  Thinking that this might just be the break he needs to get his life on track, Antonio heads to Florida to meet Bebb and to expose him not only as a shyster, but maybe even something more salacious.  instead, however, Antonio finds that Bebb's religion and family are much messier affairs than the black-and-white world he had expected.
The plot is not exactly a page-turner, but the book is so well-written, i barely even noticed.  reading buechner's fiction is like listening to an overture: as the story begins you get different themes presented, first from the horn section and then maybe a completely different theme - lighter and more joyful - from the strings.  suddenly, this all falls apart into a melodic but deeply sad but, first presented by the bassoon, then repeated by the entire woodwind section.  just when you think you've moved on to the next chapter, or the next movement, you find that those themes are being replayed over and again, but by different instruments and in different ways than you expected.  in fact, at first you don't recognize them at all.  but then, as you keep reading, you discover that the theme has been woven in masterful ways, all held together by the maestro who keeps the time and manages the dynamics.  it is breathtakingly good, in my humble opinion.
one of the major themes of the overture (book) is one that seems common to buechner in general: that grace is messy.  life is seldom as clear cut as we would like, and though the world, even at its best, is flawed and broken and naked and messy, it is also rife with God's mysterious presence, showing up in all the "wrong" places, but showing up nonetheless.  in this case, Bebb, who is a seriously flawed human being, ends up being a blessing of life and hope and courage and daring and mystery to Antonio.  this theme keeps getting played, by all the different instruments and sections in different keys and at different volumes, and it is all the more powerful for that.  other themes that weave themselves in and out are death, joy, meaning, and miracles.
a bit of trivial miscellany:  the novel's name comes from one of those drive-thru safari places where you can take a car ride through a kind of zoo where the creatures - in this case lions - are free to roam around.  lion country is a real place south of west palm beach, florida, and although the name has changed it is still there.  or at least, it was 13 and half years ago when Shannon and i visited it during our honeymoon.
i've already gotten well into the second book, "open heart," and will let you know what i think.

Unknown said…
Hello Gregory. I am a big fan of Buechner as well. You may be interested to know that he now (for the first time!) has a website: www.frederickbuechner.com.
12:58 PM

greg milinovich said…
Hey, thanks, Brian! i checked out the site and i love it! will need to spend some more time there. i'm halfway through "open heart" at the moment, and am loving it. buechner's ability to see the holy in the mundane has always resonated deep in my spirit.
6:38 AM