i mean, leprechauns love us.  they terrorize us.  they turn things upside down and make messes and color everything green and our kids love it.  so much so that cade left them a note, trying to get a response, and jack is desperately trying to catch one. 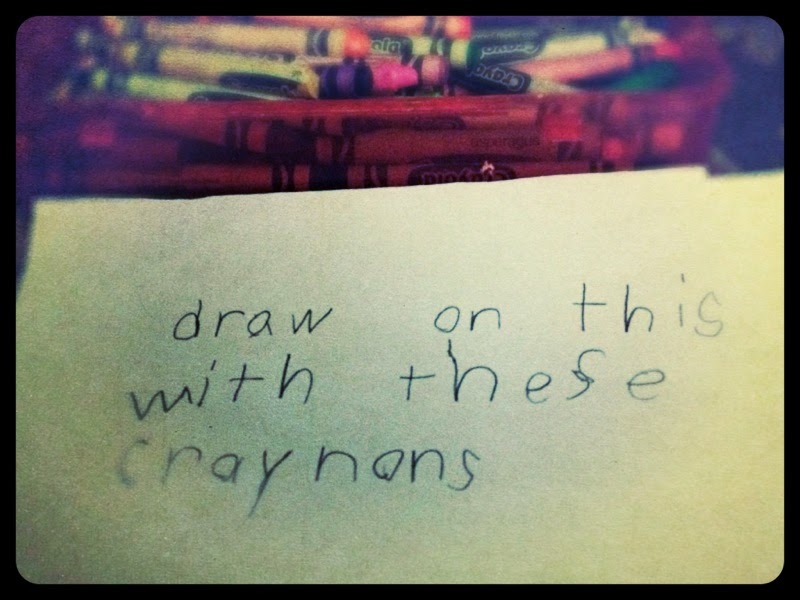 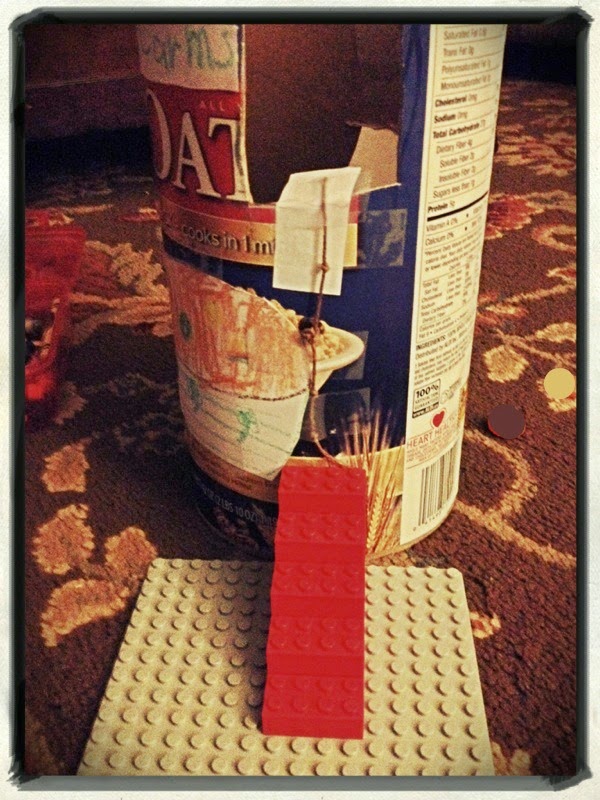 you can see that jackson's trap includes a lego staircase leading up to a door cut out of an oatmeal can (which he colored to try and disguise it as lucky charms).  he also included a rope string with knots all the way up, in case the leprechauns needed help getting up to the door.  if you were a leprechaun and you saw this lucky looking cylinder, you would clearly come over to it, not suspecting anything.  you would walk up the conveniently-located lego stairs, up the rope string, and you would peer into the something that would you bring you endless delights:  across the cylinder from you, taped to the wall, is a gold irish coin.  it's actually a euro-nickel, i think, but it says "eire" on it with a picture of a harp, so i'm pretty sure you would want it for your collection, which you keep at the base of your own personal rainbow.  well, you're in luck.  because it just so happens that there is a paper catwalk leading right across to the gold.  all you need to do is gather your courage, make certain of your balance, walk across, get the coin, and carry it back, and then you're, well, golden.  there's only one problem, as soon as you take a step out onto the paper plank, it gives way, because jack has rigged it so that what you can't see is that it is only hanging on by a thread, and the smallest bit of weight, especially the exact weight of a leprechaun, will rip it, sending you down to the lonely bottom of the pit, looking up the cylinder at the gold that could have been.  presumably, jack will rise in the morning to find you, and then force you to say "they're after me lucky charms," and other fun phrases.  what else he will do with you, i have no idea and i do not think he has really thought that part through yet, either.  he just wants to catch you.

the problem is, leprechauns are smart as shamrocks.  and here's what happened.  take a look: 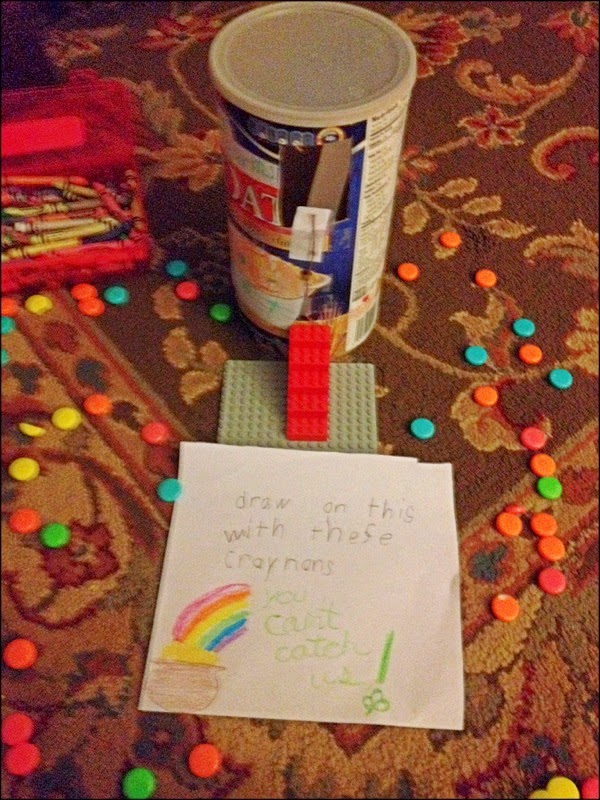 the leprechauns were here, no doubt.  they colored with cade's craynons ("you can't catch us!").  they got into jack's trap, ripped the paper catwalk, took our gold coin, and filled the whole bottom of the cylinder with chocolate coins wrapped in fake gold foil.  and those green imps left candy all over the place, made a web of green string all over our living room, took half the books off the shelves, turned the milk green, switched the ketchup and the toothpaste, took all the cushions and pillows off the couches, wrote all over our bathroom mirror, and relieved themselves in our toilet (we could tell because it was bright green!).  what a mess!

was jackson sad about not catching his emerald prey?  nope.  he was too busy shoving rainbow spree into his mouth.  i think he thought it was a win, even though i am now out one gold irish coin.  stinkin' leprechauns. 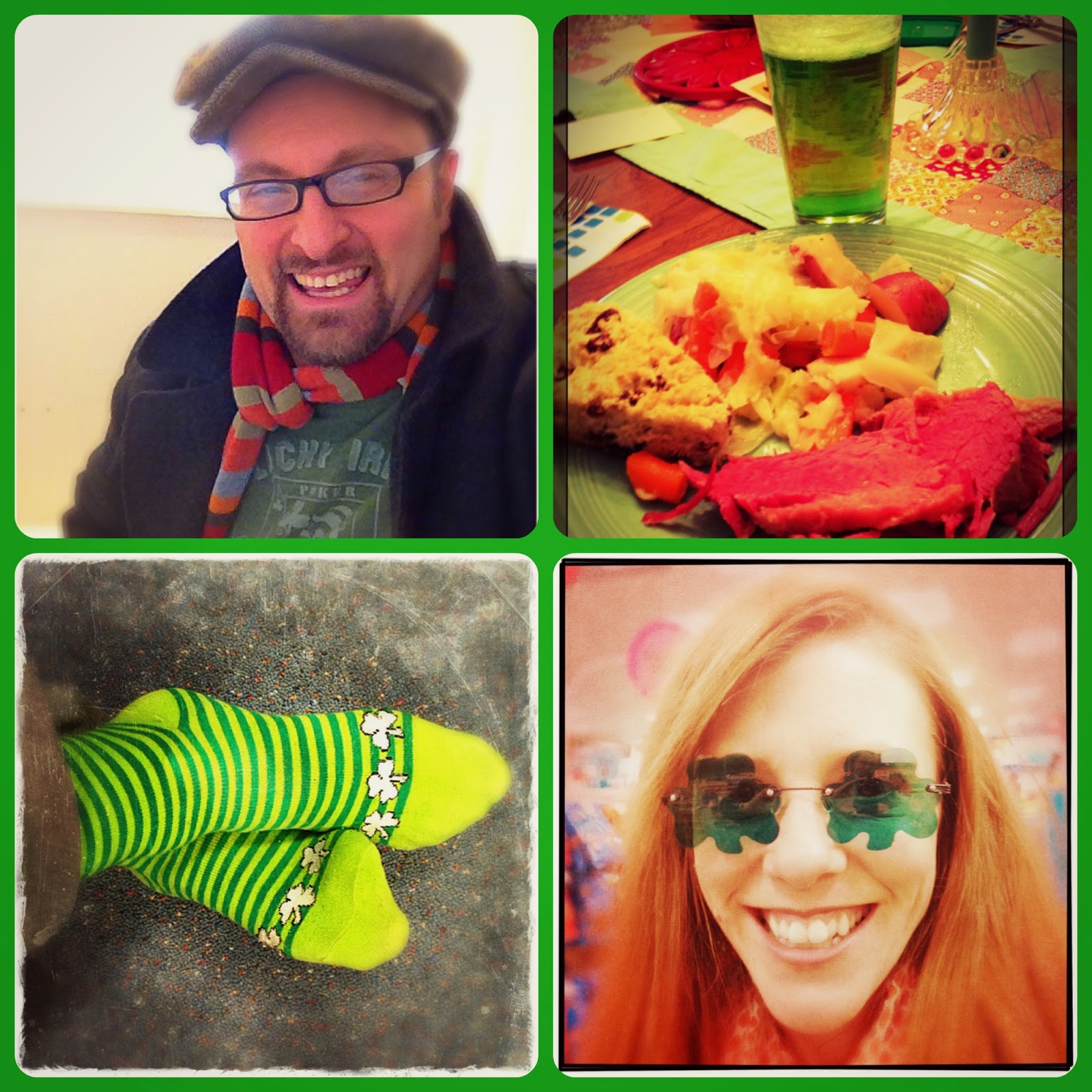