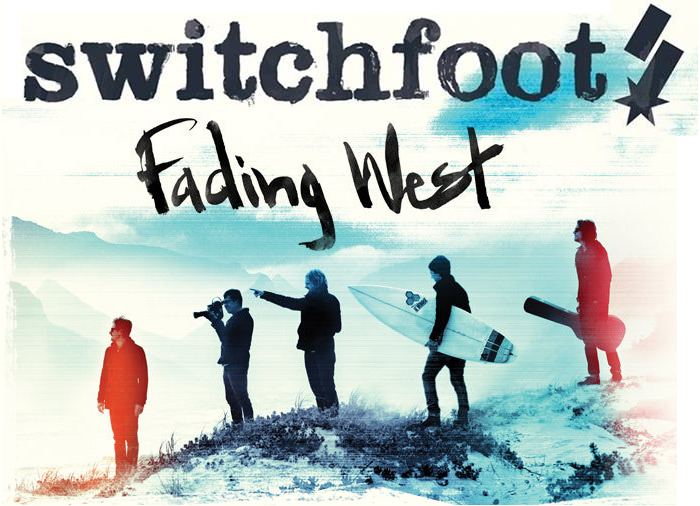 well, the tireless boys in switchfoot have released another album, and this time not only an album, but a documentary to go along!  the documentary, which has already been released, features the story of switchoot, from their simple beginnings to their globe-trotting touring today.  it also highlights their love of surfing (from which they get their name!), and attempts, like all of their art, really, to tell the stories that they've been trying to tell over these last 17 years.

their new album, fading west (the same name as the film), serves as the soundtrack to this journey, and to the film.  and as such, it is very well done.  at least, you can count this switchfoot fan as one who is delighted.

of course, i could listen to jon foreman sing his way through calvin's "institutes," and i would still listen to it on repeat ad nauseum.  it's just that voice...that passion.

and the voice remains just as passionate this time around on "fading west," with the expected social commentary (say it like you mean it), songs of redemption (when we come alive), and brilliantly composed pop tunes with anthemic choruses (just about every song), but also includes some unexpected elements, like the world-music vibe of "the wold you want," and the sonic exploration on "ba55."  other than those small surprises, though, there isn't much here that should surprise switchfoot listeners.  but that's not to stay that the band is stagnant.  on the contrary, the album feels like part of a continued journey, and exudes a mastery that is 17 years on the making.

and a final thought:  i know nothing about this, but is this album a sign that the band will soon call it quits?  again, i am not basing this on any knowledge, but the title of the album/film, and the sort of retrospective feel of the whole thing are hints, at least to these ears, that switchfoot is signaling the end of this chapter.  i hope i'm wrong, but when they close out their album by singing, "i want to go back to the beginning again," it makes me wonder if they haven't just put a period on their studio albums.  if they have, they certainly can be proud of what they've done.  they can face the west, fade away into the sunset with the assurance that they have spoken truth into the universe, and have made this a better world.

in "who we are," a song that feel's like the band's attempt to define themselves once and for all, as well as a great ode to identity and how we all know ourselves, jon sings these great lyrics which, in a way, sum up switchfoot pretty well:  “Just limited, misfit, itinerant, outcasts singing bout the dissonance."