i don't want to miss anything 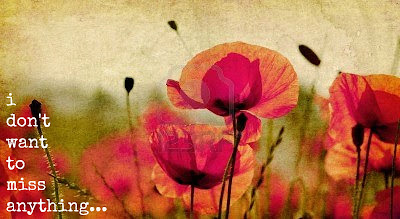 i don't want to miss anything.

that's part of the story of my life.  maybe it's part of the cost of being so wide-eyed with wonder at the width and breadth of this crazy creation, but, for better or worse, it would, at least at this point in my life so far be a suitable epitaph on my tombstone:  here lies greg milinovich who tried to make sure he never missed anything, and who died trying.

i don't know why this is even in the forefront of my mind right now, other than it just seems to keep coming up and showing itself to me in various ways, and perhaps even writing about it here is narcissistic, but, alas, i might as well just own up to that charge.

here are some examples of my condition:
-i have terrible difficulty ordering at a restaurant, because to order one thing means to not order everything else.  i almost never decide what i am going to order until the words come out of my mouth.  it is as if i am only ordering because i simply must choose something, rather than because i really want to choose that one thing.  i might want a reuben, but i also don't want to leave all the other sandwiches unchosen, unpicked, untasted, and inexperienced.  i want to try them all...i don't want to miss anything!

-when in large groups of people, i have a hard time focusing in on just one conversation, because i want to know what everyone else is talking about, too.  this is, obviously a terrible trait, and i try to work on it, but in the end, i don't want to choose just this conversation; i don't want to leave all the other conversations unheard...i don't want to miss a thing!

-i listen to my ipod almost exclusively on shuffle, which, for those who don't know, means that it randomly plays its way through my 15,000 songs.  why?  because how in the world am i going to choose one cd to listen to, out of all the hundreds of albums?  to choose one album would be to not choose all the other ones.  so i let my ipod do the choosing, leaving it to random chance, and i feel that i am off the hook.  i don't want to miss a thing!

-if you have ever asked me one of the those "what is your favorite?" questions, you will almost certainly have heard me say that i really can't pick favorites.  this is been true for so long for me.  how can i say that cinnamon toast crunch is my favorite cereal, when there is also fruit loops, reeses, and fruity pebbles?  how can i say that a twix is my favorite candy bar when there is also cadbury, caramellos, milky ways, clark bars, and so many more?!?  to pick one favorite is to not pick so many others.  and i don't want to miss a thing!

-one more.  media.  come into my house some evening after the kids are in bed, and you might very well find me doing all of these things at once:  (1) watching a baseball game, (2) listening to music, from the ipod on shuffle, of course, (3) watching an old episode of star trek on the ipad, (4) playing a game on my phone, (5) and surfing the web on the laptop, looking up things as i experience them, like "what are the lyrics to that vampire weekend song?" and "how do you breed a t-rox on my singing monsters" or "what was captain kirk's middle name?" and other such important issues.  i could choose to really watch one thing, or do one thing, but choosing that would mean not choosing all the other things, and think of all the things i might miss.  i don't want to miss a thing!

sigh.  this is my life.  this aerosmith condition (i don't wanna miss a thing) is both a blessing and a curse, i think, like most anything else, i suppose.  anyone else out there have a similar experience?

Emoly said…
I can't say that I have. The closest I've come is; while I was scraping paint off the door trim, I realized how I'm a doer.
Bill wants to pay someone to re-glaze the windows, but I'm not about to let someone else paint when I am perfectly capable of painting the trim, windows and sills myself. Just because it's going to keep me busy for the next sixteen years (we have sixteen windows left to refinish) it keeps me busy.
First, there's a saying (I wish I had thought of this, but I did not): the only thing working in an old house is its owner.
Second, if I weren't busy doing something like painting or working around our house, I would quickly become a "Housewife of Grand Rapids", spending time at the mall, buying things we don't need.
I have a very difficult time, just being still.
4:04 PM