May 24, 2013
i'm that guy.  i like to try and impress my family with my vocabulary.  really, even though i know you won't believe me, it's not that i want to try and impress them so much as sometimes i feel it is more dramatic to use a stronger, lesser known word when a more familiar word would almost certainly do.  its all part of the drama of me being  me.  which is the beginning of this story.

we were at the dinner table.  i was being dramatic about something (which is to say that everything was about as normal as it gets at our house).  i was trying to explain something about why my jaw made the noise of a large zambelli brothers firecracker, and i said, referring to a bit of food, that "i masticated it."  shannon misheard this, thinking that i had said i "maxlucado-ed it." 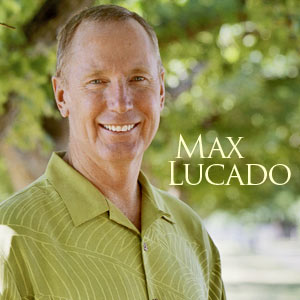 it instantly caught on.

but rather than being a synonym for chewing, we decided to assign a new, more appropriate meaning for maxlucado as a verb.  john acuff, the hilarious writer of stuff christians like, already has a term called a jesus juke, and our new word "maxlucado" is somewhat similar.

to maxlucado something is to turn an ordinary event into a concise "devotion" which immediately induces head nods and deep grunts of agreement.  it is, for example,  to look at a piece of ice and instead of seeing it as an object to cool your drink, see it as a metaphor for the trinity.

now, don't get me wrong: this isn't a bad thing, necessarily.  i do this all the time.  here is an example of me maxlucadoing the concept of facebook friends.  go back through this blog and you'll find that i'm constantly maxlucadoing the heck out of things.  in fact, if you can figure out how to properly maxlucado something concisely, find a short scripture that applies and a one-sentence prayer to go along, you've got a career with the upper room or our daily bread.  or maybe even as a preacher.  because, to be honest, preaching is really just looking at the ordinary stuff of life and maxlucadoing it until someone - please somebody! - sees the sacred right there in the mundane.  part of my job as a preacher is to demonstrate that the presence of God is shouted out by the very trees, so that when you're cutting onions or watchig reruns of everybody loves raymond you are discovering truth and life and beauty and hope and gospel.

and if you thought this was going to be a post about a silly family story or a new word we created, you just got maxlucadoed.  as rob bell likes to say "this is really about that."  or was that Jesus?  he often said, "the kingdom of God is like" and then he would talk about mustard seeds or farmers discovering treasure or a shepherd losing his sheep, or any number of other totally mundane bits of life that he maxlucadoed into something profound, lifechanging, and meaningful for his followers for centuries to come.

so stop looking at ice merely as a cause for a brainfreeze.  stop thinking about facebook friends as a status symbol.  stop thinking about mustard seeds as, well, who thinks about mustard seeds?  anyway, start seeing all of life as God's domain!  start seeing even the most simple and mundane parts of life as pieces of God's great love story to you, little reflectors and refractors of the great glorious good news: there is a God and this God loves you!

consider yourselves maxlucadoed.  now go and do likewise.

ps.  i really like max lucado, and this is not meant to ridicule him.  we just did a book study on his book "fearless" a few months ago and really enjoyed it.  it just so happens that shannon thought i used his name as a verb, and it caught on.  no hard feelings, max.  also, are you wearing a palm leaf in that picture, or did you just walk through a spider web?  speaking of spider webs, it makes me think about the way we're all connected....

Cmilinovich said…
Oh the beauty of words and their misinterpretation! So funny! I like it though. We can always look at things through our eyes of faith as well as our physical eyes.
10:53 PM