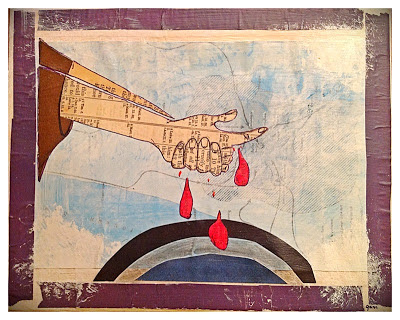 "pontius pilate"
mixed media collage (acrylic paint, found papers, ink, glue) on stretched canvas
gregory a. milinovich
february 2013
this year during lent we are doing an evening service called "in search or resurrection," looking at some various characters of the passion story, and allowing them to shed light on our understanding of Jesus, his love, and the power of the resurrection for our lives.

we started this week with pontius pilate, and one of the things we talked about is that while the lasting image we have of pilate is of an essentially innocent man put into a tough position, washing his hands of any guilt.

this couldn't be further from the truth.

actually, the Jerusalem leaders brought Jesus to pilate after their late-night trial because, truth be told, there wasn't much they could do about it.  they desperately needed pilate to carry out the sentence they so desperately wanted: death.  pilate can wash his hands all he wants, but he will never be able to really wash off the blood of Jesus caught in his wrinkles and under his fingernails.  he alone had the power to let Jesus go as the innocent man that he was.  but, for a variety of reasons, not least of which was that pilate required the allegiance of the Jerusalem leaders to maintain his delicate version of power, prestige and position.  without the support of caiaphas, annas, and the others, he would have soon lost it all.  well, except for his integrity, but Pilate had already decided to surrender all of that, as revealed by his telling question echoing down the centuries, "what is truth?"

sometimes we read that statement as if pilate was philosophizing or wondering in the deep recesses of his mind.  i don't see it.  instead, i think he is scoffing at Jesus' mention of truth.  politics has a tendency to reduce truth to a commodity to be used solely for gain at best, or swept under whatever rugs can be found, more likely.  there comes a point when you lie so much that you forget what the truth really is.  i think that was the nature of pilate's question.  i think he scoffed when he asked it, with a pathetic shrug of the shoulders and a helpless apathy towards the actual answer to the question:  pshhww....what is truth?

truth is, pilate doesn't really care about truth anymore.  it has become a casualty in his campaign to maintain his power, his position, his privileges.

we may not have the power of a governor, but we have power nonetheless.  and the question that i think pilate begs in us is this: what do we do with the power we have?  do we seek to preserve it at any cost, even if that cost is truth and integrity?  are we willing to throw other under the bus, and publicly wash our hands so it looks like we have nothing to do with it?  do we so revere the status quo?  do we so fear change, that we would rather live in lies than in the light of truth?

pilate has blood on his hands.  but so do i, if i stop washing them long enough to take a look.  and nothing short of resurrection will wash them clean.