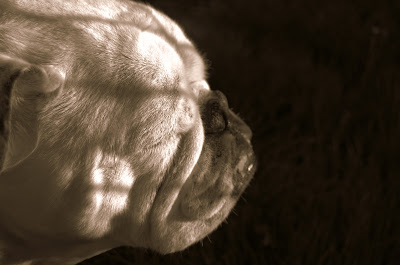 well, as some of you already know from facebook, we lost our beloved dog to cancer yesterday.  as i wrote in his birthday post earlier this year, his health was obviously declining over the last year, but he still had a good quality of life until these last few days when we were forced to make that terrible decision about what to do for him.  it was possibly the hardest thing i had to do in my life, as i held his 65-pound frame in my arms and whispered into his ear as his life slipped away.

what did i whisper?

some things i won't tell you.  but i can tell you that i told him how proud we are of him.  how he was the best dog imaginable.  i told him some of the things i will miss about him, like his insanely loud snoring, and the smell of his paws and the velvet-soft texture of his ears.  i told him he was our first child, and he was an amazing big brother.  i told him i was crying for sobbing all over him like a big, blubbering baby.  i told him that we will always remember him as an integral part of our family, and we will never stop looking at pictures and telling stories about him.  and, heck, i even worked a little theology in there.  i reminded him of isaiah 11 (which we had talked about before) and how i believe in a new creation.  i reminded him of our previous conversations about all that God created being redeemed, and about a future with new cancer or sore hips, but only fresh nylabones and hours and hours of pure, unadulterated sleep.  i assured him that i would scratch those ears again, so he'd better keep one nostril open for my scent.  and i told him that i love him.  like a hundred times.

and he died.  just like that.  no more claws on the hardwood floors.  no more snoring sounds to lull me to sleep at night.  no more constantly needing to go outside.  and, thankfully, no more huge tumor pressing on his kidney and spleen and liver.  no more limping.  no more having a snotty-nosed toddler trying to ride you constantly.  no more crates or leashes.  no more ridiculous poses for family pictures.

but he lives on, in a variety of ways, not least of which is the memories of max we have in our family; stories we already started sharing around the dinner table last night, with mixed waves of laughter and sobbing.  a bunch of snotty-nosed people, remembering the stout life of one stubborn and stubbornly faithful, "formidable chunk of dog" as one dear friend called him.  yes, Max taught us a great deal about life and love and faithfulness and unwavering mercy, which is why i chose to put a few pictures of him to this song in the video below.  it is by wendy francisco, and reminds each of us of the spiritual significance of our canine friends, the greatest of which, at least in the hearts of the milinovich family, was Maximus Drake Milinovich.  snore in peace, buddy.

Anonymous said…
greg, i missed this post. i am so sorry to hear about max. i so know how you guys are feeling. when we lost rookie two years ago to blout, it was awful. she was perfectly healthy one day, and gone the next. i hope your hearts heal soon and a new dog has the opportunity to enjoy such a great family. erin
4:17 PM