last night was an opportunity for my sports nightmare to either continue down a road towards despair, or come to a merciful end.  thankfully, despite a dubious beginning, the steelers prevailed over the bengals and helped me wake up from the nightmare.

these sunday night games are killing me.  the game doesn't get over until 11:30, and then i'm way too amped to go to bed.  monday morning comes way too soon, and i'm walking around in a stupor.  at least a win helps make it bearable. 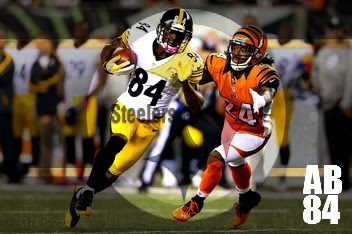 antonio brown is quickly becoming one of my favorite players.  he is so good, and just seems to fight for every yard.  he doesn't miss much, and reminds me of a guy you may have heard of named hines ward.  except much more athletic.  he was very good last night, and would have had an impressive statistical night if there wasn't some sort of special teams penalty called on every punt.  ridiculous. 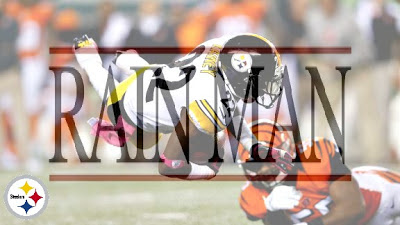 it was also fun to see the new kid make it to the end zone for the first time.  rainey is fast, and while i get tired of watching him run right into the backs of his lineman and fall down when he runs between the tackles, the play they ran down in the red zone was beautiful, and a great hole opened up for him to turn the jets on and fly into the end zone.  congrats, rain man.

what can i say about heath?  he is having a probowl season.  if he's not catching td passes, he's catching alley-oop passes for 2-point conversions.  when he's not converting third-and-nines across the middle, he's sealing the edge for the third string running back to pick up some yards.  he is an all around tight end, and an unsung hero in the nfl.  much love and respect, heath. 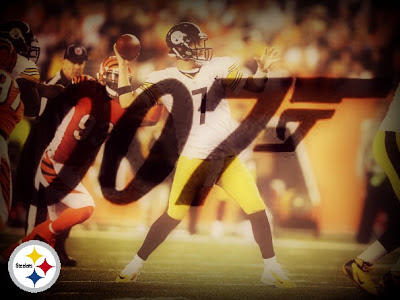 and i must end with 007.  yeah he made some mistakes.  he tried to do too much on at least 3 occasions where it came back to bite him.  but in the end, he won, which is what he does.  he wins.  he finds a way.  he overcomes the odds.  he overcomes some major injuries to his offensive line.  he overcomes only being able to work his 3rd-5th string running backs.  he overcomes an early interception and fumble.  he overcomes several drops by his marquis receiver.  and he wins.