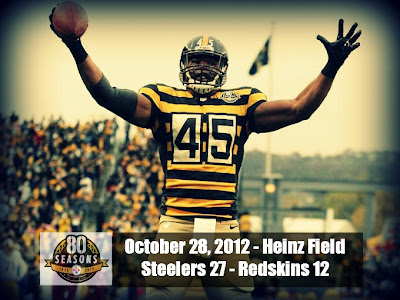 there was an old-school feel to the drubbing delivered to the washington redskins at the hands of the pittsburgh steelers yesterday, and it wasn't merely because the steelers uniforms looked like something out of a charlie chaplin film about a jailbreak.  no, it had just as much to do with the steelers running the ball effectively, stopping the redskins from doing the same, and sending another nfc team away from heinz field with a an additional 'L' on the record. 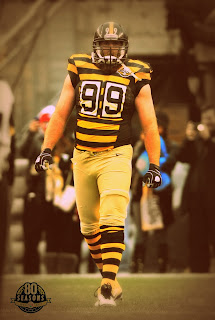 the steelers donned striped uniforms that predictably drew strong reactions from commentators and viewers alike, celebrating their 80th season in winning style, if not in runway-quality material.  still, even though just about every loud voice was suddenly a judge on "project runway," those bumble bee convict jerseys will be flying off of shelves, continuing to accumulate revenue for one of the most successful franchises of the last 40 years.  and if winning is traditional in pittsburgh, then the steelers were traditional on a day when the media was ready to pronounce the redskins, or at least their quarterback, as the latest greatest thing. 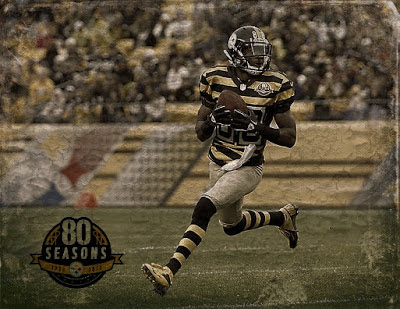 oh, rg3 is good, no doubt, but he is mortal, after all, and dick lebeau and the steelers defense took the opportunity in the rain to demonstrate it in front of a rabid hometown crowd.  while his receivers didn't seem all that interested in helping him, he also did little to show that he is ready to face a defense like the steelers.  most of the positive things that happened for the redskins relied solely on trickery and unusual plays.  when it came to actually moving the ball consistently, there was only futility for rg3.  he completed way less than half of his passes, only ran for a handful of yards, took some brutal hits, and was even flagged for pass interference. 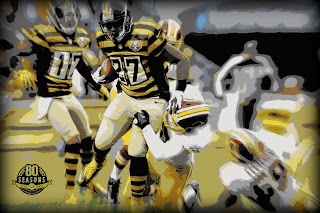 the steelers meanwhile, at least for most of the game, were quite consistent, scoring on their first four drives, and running and passing the ball effectively.  while not as adept as usual at converting third downs, they nonetheless managed to sustain an offensive attack that was equal parts pass and run, balanced between wide receivers and tight ends, ground-and-pound and speed on the edge. 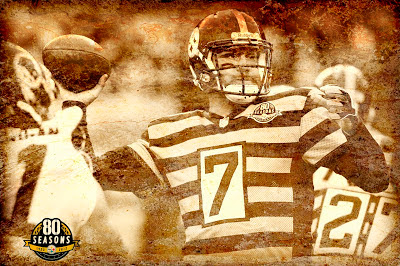 and all of it, quite frankly, seemed to be under the control of the strong leadership of one ben roethlisberger, who was every bit the field general that rg3 should hope to be someday.  in this, their 80th season, ben is forging new territory, going places no steelers qb has ever gone.  even if he isn't impressing heidi klum (or you) in the way he looks while doing it.  at least he doesn't look like this: 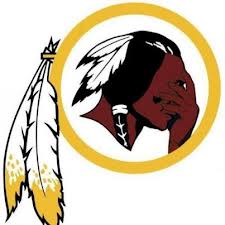 Mary said…
I thought they looked awesome in the uniforms. love the old pics you made :)
3:39 PM

greg milinovich said…
yeah, i liked them too. i thought they were intimidating, like angry bees coming out of a nest. and thanks about the pics....i love doing it....i have to make myself stop!
3:59 PM