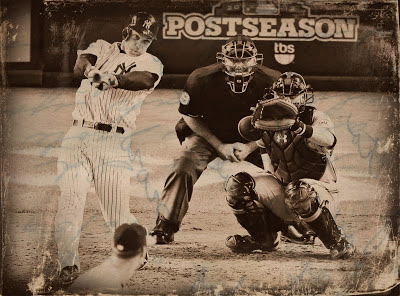 last  night the alds between the yankees and orioles moved to the bronx, where the mystique and aura often seem to buy front row tickets and make their presence known.  last night was no different.

oh, sure, it took a while for them to show up.  the orioles made the yankees look absolutely anemic, like they were trying to hit baseballs with toothpicks, except for russell martin, who finally found his bat after missing it for most of the regular season, and derek jeter, who is "too old" and so they are probably just throwing him batting practice pitches and it sure looked like adam jones was cheating up closer to the infield and turned what would normally be a routine flyout to center into a run-scoring, game-tying triple early in the game.  don't underestimate the hall-of-fame shortstop known around the bronx simply as "the captain."  he may be too old; he may have lost a step; he may have just bruised a bone in his foot last night; but last i checked he had 6 hits and 2 RBIs in 13 at bats in this series so far.  mystique and aura may have shown up late, but Jeter was right on time, as usual.

still, the offense was generally awful.  granderson looks lost.  cano seems to have cooled off.  tex is slower than a derailed subway train.  and a-rod looks like he might have gone blind and doesn't want to tell anyone.  girardi turned him into the DH last night, hoping that a-rod would do something - anything - with the bat and make him look smart, but you could tell he was more than anxious to get him out of the game.  so he had a "gut feeling" in the 9th, which is to say that he finally did what he knew he should have done when he wrote the original lineup, and he put raul ibanez in to pinch hit. 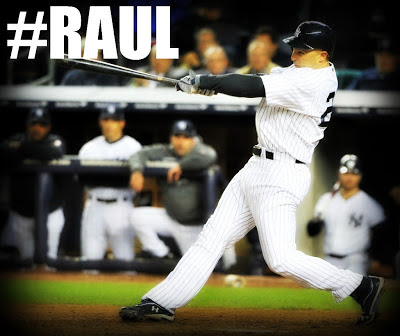 raul promptly tied the game in dramatic fashion, before passing the baton to the rest of the offense, who responded by continuing their ineptitude for three more innings.  the only hope the yankees had was to get a great performance from the bullpen, which they got.  great work by boone logan and soriano (on a night when rivera threw out the first pitch!) and robertson kept the yankees right in, at least until ibanez's spot came up in the order again.

and when #27 came up to the plate, that number on his back more than just a line in a media guide, he wasted no time.  with a nod to mystique and aura sitting in the front row right down the first base line, he offered an authoritative swing at the first pitch given to him, and he sent it to the second deck in right field.  boom.  joe girardi, with a #28 on his back, looks like a genius, or at least a man with a very good gut, and the yankees tip their hat to the stadium ghosts, as they move one step closer to the next level in their quest for that 28th championship. 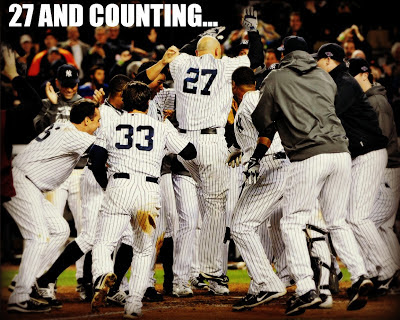