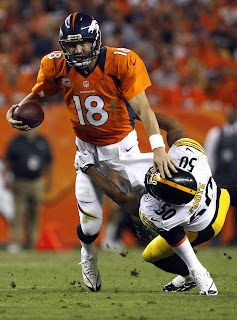 well, it's good to have football back.  no, last night's game really didn't go the way i hoped, but, in all honesty, it didn't end up being much of a surprise to me, either.  i've been telling everyone that i was worried about the youth on our defense, and especially without harrison or clark last night, it was an obvious issue.

what i hadn't worried about was the running game. looks like that may be an issue, too.

and of course, the offensive line coming down with every ailment from short of west nile during the course of the game feels familiar.  hard to utilize all our speed and weapons on offense when your line is below average at best.

so, it was tough to lose, especially to that waving, gesturing, drama king prima donna who couldn't have practiced much this offseason, what with his busy tv schedule.  however, it was a tough environment on opening day, going into denver against a very hyped-up broncos team and crowd.  the steelers showed some good things, and will certainly have some things to work on before they welcome the offensively inept amazing new york jets to heinz field next week.

football is back!  and that's a good thing, no matter what the steelers did.