most epic fantasy football draft ever

not really, but it sounds better that way.

i have played fantasy football for several years now.  each summer, as the days begin to shorten and school starts and you can begin to taste autumn in the mornings and evenings, someone always says to me, "you should play fantasy football with us in our league," and i remember how i felt about midway through the previous season, vowing never to play again, but somehow the magic of it all sucks me in and i find myself planning for my draft.  football just has that power over me.

now, in case you don't know, fantasy football is really about individual statistics.  you draft a bunch of nfl players for your team, and you are hoping to get guys who will perform really well individually for their teams, so that your score will be high, and you can defeat your opponent.  the draft, at the beginning of the season, is when everyone picks their players, and that leads to the first problem for me.  in order to be good at the draft, you have to really know a good deal about football players around the league, or else study somebody elses's draft board.  but that isn't really me.  i mean, i love football.  LOVE it.  but i don't care any more about the stats of the starting wide receivers of the green bay packers than i do about the job performances of the cameramen on cnn.  i care about one team and one team only:  the pittsburgh steelers.

this leads to my next problem.  once you draft a fantasy team, you end up with a hodgepodge of nfl players.  you may have peyton manning as your qb, chris johnson as your running back, dez bryant as a wide receiver and somebody from the cheatriots as a tight end.  in other words, you've got guys from teams all over the nfl, and in order to win your fantasy football game, you need each of those guys to perform well that weekend.  so let's say, i've got peyton manning as my starting qb, and he now plays for the broncos.  well, guess who the broncos play in week 1?  the pittsburgh steelers.  so now i am conflicted.  of course i want the steelers to win, but i also want peyton to do well so that i can win my fantasy game.  so i am forced into rooting for strange outcomes like, "i hope peyton manning throws for 7 touchdowns against the steelers, but then the steelers score 8 touchdowns and win the game!" or other outlandish and ridiculous scenarios.  in the end, i can never really convince myself that this is realistic or possible, so i end up just rooting for the steelers to win, and stop caring about my fantasy team.

this happens every year.  and i decide that i will never play fantasy football again.  but then i do.  arggghhh.

this year, i decided i wasn't going to play.  but then i got asked to join a league again.  but this time i said no.  then i got asked again, and one more time.  so i relented.  just like every other year.

but this year i finally made the important change i needed to make:  i decided to draft as many steelers as possible, so that i could eliminate that awkward and awful game-day conflict.  i thought for sure that my plan would be thwarted by someone else picking up mike wallace earlier than expected, or somebody seeing what i was doing and just trying to be a fly in my ointment.  but it didn't work out that way. 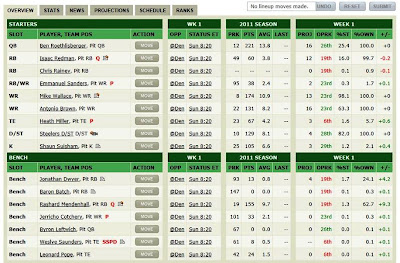 as you  can see, it worked out perfectly.  my entire team is black and yellow, black and yellow.  whoever plays me in week 4 (i'm looking at you, AJ) is going to destroy me (the steelers are on their bye week, so i will get all of 0 points), but every other week i will be able to root for my favorite football team (thre greatest football team in history) and my fantasy football team at the same time!  an epic victory of the human spirit over the obstacles that life inevitably provides.

ps.  here's my round by round breakdown, just for a good laugh for anyone who understands fantasy football and just how ridiculous it is that i did this:
round 1:  ben roethlisberger
round 2:  mike wallace
round 3:  steelers defense
round 4:  antonio brown
round 5:  isaac redman
round 6:  heath miller
round 7:  chris rainey
round 8:  emmanuel sanders
round 9:  shawn suisham
round 10: jonathan dwyer
round 11: baron batch
round 12: rashard mendenhall
round 13: jerricho cotchery
round 14: byron leftwich
round 15: weslye saunders
round 16: leonard pope

how epic is that?

Happy said…
I just read this post to Derek. At seven a.m. I am pretty sure that seals its epic-ness.

You go hard, Greg. You go hard. (Our teens use this expression often and I am pretty sure/hoping it means something to the effect of "You are hardcore."